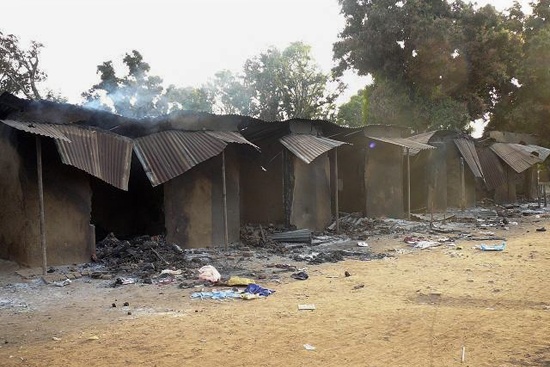 Homes were destroyed and people displaced when the Lord's Resistance Army (LRA) attacked Faradje, in Haut Uélé territory, in December.

"When we saw how they killed my son-in-law, we fled to the forest. I took my father, who is blind. I had to take my younger brothers out of there as soon as possible as they were always taking children away. In the end, we managed to escape to the forest."

More than three weeks after the Christmas attacks on the towns of Faradje and Doruma and three days after the invasion of Tora—all in the Haut Uélé district of eastern Democratic Republic of Congo (DRC)—Lord's Resistance Army (LRA) combatants are continuing their devastating assaults against civilians, and moving closer to the Dungu area.

During the days leading up to the January 17 attack on Tora, the towns of Sambia, Subani, Akwa, and Tomati were assaulted, one after the other. Now, the MSF team is witnessing the arrival of the first refugees from these areas. They first fled to Ndedu, a small town 30km (18 miles) south of Dungu, where they joined displaced people from Dungu, Duru, and Bangadi who had fled attacks in late 2008. Tens of thousands of people reportedly are now walking dirt roads south of Garamba Park to get to Dungu, in search of shelter.

“It is increasingly difficult for the team to assess the needs of the displaced people, set up mobile clinics, and, if needed, to refer wounded people to Dungu hospital,” says Charles Gaudry, MSF field coordinator. Insecurity is one of the major constraints. Even traveling by plane is difficult, as no one knows what is happening in the small towns where the teams are supposed to land because the LRA’s movements are unpredictable. MSF teams cannot stay in one spot longer than a couple of hours, which is just enough time to assess the patients’ situation in health structures, evacuate the most seriously wounded, and give drugs and medical equipment to the health clinics that often have been looted.

As one of the few organizations working in the area, MSF finds it extremely hard to know what is happening in this region where attacks are quickly multiplying. Knowing how many people have been displaced or even killed in this vast territory, over which villages and small towns are scattered, has been impossible.

However, since a Human Rights Watch team investigated the Christmas events, they have confirmed the killings of more than 600 men, women, and children, and the kidnappings of 500 youths.

An MSF team that visited Faradje and Doruma immediately after the attacks in order to provide emergency care, observed that the combatants leave few wounded. “They obviously come to kill,” says MSF’s Dr. Matthieu Bichet, who also visited Faradje and Doruma, as well as Bangadi. “The couple of wounded people we nursed were clearly left for dead. That is what saved them.”

For MSF, the humanitarian situation of those populations is an emergency. “MSF is reinforcing its teams in order to be more reactive just after the attacks,” says Marc Poncin, program manager for DRC, based in Geneva. “But we also have to acknowledge that in such situations, it is very difficult to intervene for those populations, whose need of support, security, and protection is so important. Today, even the security of our medical staff, national or international, is not insured. So let’s imagine what it means for the population.”

The MSF team remembers only too well the latest attack on Dungu on November 1. The hundreds of UN Mission in the Democratic Republic of Congo (MONUC) troops stationed in the area stayed put in their barracks, leaving the area to be overrun by combatants.