MSF is treating an influx of patients for malnutrition and malaria in Niger's Maradi region. 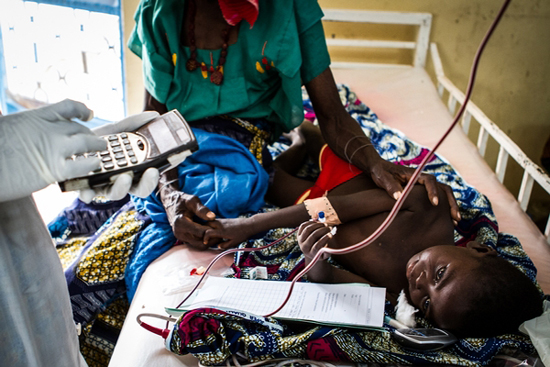 An MSF nurse checks on a young patient admitted to Guidan Roumji hospital for malaria and malnutrition.

Ambulances come and go constantly at Guidan Roumji hospital in Southern Niger’s Maradi region. Inside the hospital, a Doctors Without Borders/Médecins Sans Frontières (MSF) team is working to treat a large influx of children weakened by malnutrition and malaria.

In the past few days, the number of children admitted to the hospital has risen from 117 to 430. “The intensive care and pediatric units are overwhelmed—we have an occupancy rate of 200 percent,” says Mirko Tommasi, MSF head of mission in Niger. “We were already treating lots of malnourished children but, with the start of the rainy season, there has also been a sudden peak in malaria cases. Nearly 80 percent of the children admitted have malaria,” he says.

Food shortages are inevitable during the “lean season” between the May and September harvests. The heavy rains, which began in July, have destroyed crops and grain reserves, worsening an already desperate food situation. The rains have also led to a proliferation of malaria-transmitting mosquitoes.

When children in remote villages catch malaria, their condition often becomes serious before they can see a doctor. “Children with malaria often arrive too late, in a comatose state, owing to a lack of access to adequate health care in their villages,” says MSF’s medical coordinator Véronique Van Frachen.

“One of the reasons malaria is so deadly is that it can cause severe anemia, just like malnutrition,” says Van Frachen. Malaria and malnutrition are a fatal combination. Malnourished children are not strong enough to fight illness, and so are more susceptible to complicated malaria. A malnourished child will have a greater risk of dying than a child who has enough to eat.

Malnourished children who develop a severe form of malaria are treated in an inpatient unit for both illnesses simultaneously. Malnutrition is treated with ready-to-use therapeutic food, while severe malaria is treated with an artesunate-based therapy.

Every year, the people of Niger face recurring food crises, putting a tremendous strain on communities. Often people have barely recovered from one food crisis before the next strikes, forcing them to sell valuable possessions and go into debt in order to buy enough to eat.

To reduce the cycle of malnutrition and associated diseases, MSF and Niger’s Ministry of Health are carrying out prevention work, including vaccination campaigns and the distribution of specific nutritional products and mosquito nets. Since the beginning of the year, more than 150,000 children throughout the country have received emergency treatment from humanitarian agencies.

“To break this cycle of recurring emergencies, a long-term solution is needed, one that will improve access both to health care and food suitable for young children,” says Mirko Tommasi.

In Niger, MSF is carrying out medical and nutritional work in the regions of Tahoua, Maradi, Zinder, and Agadez. More than 50,000 children with acute malnutrition and 105,000 cases of malaria have been treated since the beginning of the year in medical facilities managed by MSF and its partners.