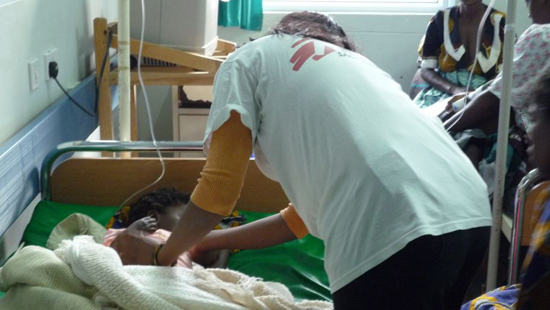 MSF staff tends to a Malawian living with HIV.

Since the 1990s, the HIV/AIDS pandemic has been a serious public health issue in southern Africa in general and in Malawi in particular. In 1995, MSF launched an HIV/AIDS treatment program in the country, and in 2001, the first Malawian patients were placed on antiretroviral treatment. At present, 18,000 patients are now taking these drugs.

An overview of MSF's work in Malawi with people living with HIV/AIDS: 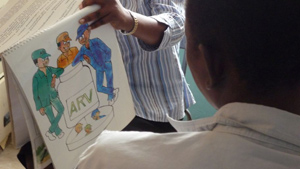 Malawi has one of the world's highest rates of HIV/AIDS. Twelve percent of the population age 15-49 is infected. In 1995, MSF decided to focus its activities on HIV/AIDS in Mwanza, providing support to the Ministry of Health, offering medical care to patients, and organizing prevention and education campaigns.

In 1997, the organization initiated an HIV/AIDS program in the rural district of Chiradzulu, in the southern part of the country, where nearly one in seven people is infected. The program provided medical care, treatment of opportunistic illnesses (like tuberculosis), and palliative care.

In August 2001, MSF placed its first patients on antiretroviral treatment (ARVs). At that time, the goal was partly to demonstrate that these drugs could be administered easily in an environment with limited resources, few treatment options, minimal medical infrastructure, high poverty rates, and low literacy rates.

Patient support groups were organized so that individuals taking ARVs could share their experiences, give patients a renewed sense of hope, and address the lack of information about HIV/AIDS and treatments. Counselors helped patients with the daily issues of living with HIV/AIDS and ensured that they took their medications regularly. Tailored approaches were developed for children, who represented approximately 13 percent of MSF's patients.

Access to ARVs in Chiradzulu district made a real difference for patients, their families, and the community. MSF was a pioneer in this field as the national government did not provide free ARV treatment until 2004.

Given the breadth of the needs and the country's shortage of health workers, new treatment approaches had to be developed in collaboration with the Ministry of Health. The new approaches were based on: 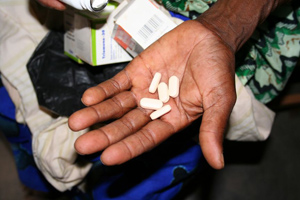 A woman holds a two-month supply of generic antiretroviral medicines, fixed-dose combinations of three medicines contained in a single pill, the use of which MSF helped pioneer in Malawi.

By 2009, each district health center was able to provide a full range of care, from screening to monitoring patients on ARVs. MSF continued to develop certain activities, such as support for prevention of mother-to-child transmission (PMTCT), pediatric treatment and detection of treatment failures.

MSF supports HIV/AIDS treatment programs in 11 health centers in Chiradzulu district. The organization is also working in the hospital and, in particular, in the tuberculosis unit, where the mortality rate and percentage of HIV-positive patients are highest. Last, MSF is supporting the Ministry of Health in setting up a PMTCT unit within the hospital, and running a treatment program in the Thylo district.

We are currently following 27,000 patients, of whom 18,000 are taking ARVs. Every month, more than 650 people enter our program. More than 300 of them start ARV treatment immediately. Our team is composed of approximately 20 international staff, on average and approximately 200 national staff. MSF also pays a salary supplement to around 150 Ministry of Health employees.