In spite of destabilizing conflict, MSF continues to work in Timbuktu and the surrounding region. 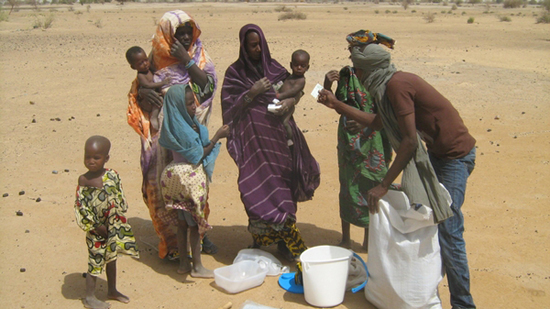 Since mid-April, a Doctors Without Borders/Médecins Sans Frontières (MSF) team has been working in Timbuktu’s hospital, providing medical care for people living in a region destabilized by the conflict that has enveloped the country’s north and displaced thousands in recent months.

For much of the time MSF has worked in the hospital, Timbuktu has been controlled by Tuareg rebels and armed Islamist groups, and much of the city's population has fled either to other parts of Mali or neighboring countries. Tension has pervaded the city, nearby health centers have been pillaged, sporadic fighting has flared up among armed groups and, recently, sacred sites around the city have been destroyed.

“Bringing aid to this destabilized region is a challenge, but it’s also a necessity,” explains Dr. Mego Terzian, MSF Emergency Desk Manager. “The instability impedes the access of humanitarians, and the north of Mali remains blocked to westerners. Nonetheless, because the situation remains volatile and could deteriorate at any time, we are maintaining our presence in Timbuktu’s hospital and in the surrounding villages.”

MSF is one of very few humanitarian organizations present in the region. MSF staff is providing medical care in the city hospital’s departments of pediatrics, medicine, gynecology, and, since mid-May, surgery. Like the city's inhabitants, some of the hospital’s medical personnel have fled. Sporadic fuel shortages disrupt the supply of water and electricity, which in turn impedes the hospital’s operations. Furthermore, the hospital lacks adequate medications.

With MSF's support, the hospital has admitted more than 300 patients, and MSF staff have conducted more than 1,500 consultations. In recent days, restrictions have been placed on vehicle movement inside and around Timbuktu. MSF teams nonetheless continue to provide medical care outside the city, in Niafounké, Goundam, and Gourma-Rharous, while attempting to limit medical referrals to the Timbuktu hospital.

Over the past two months, MSF teams have performed more than 6,300 consultations all told. The primary diseases observed are respiratory infections, diarrhea, and skin conditions, often related to a lack of water and poor sanitary conditions.

MSF teams are also closely monitoring the nutritional situation. Pockets of malnutrition have been observed in the region, and teams have already treated some 800 malnourished children. Malnutrition is a chronic problem in this area. It regularly becomes more critical each year with the onset of the “hunger gap,” the lean period that falls between two harvests. The concern is that the instability in the region could make it even worse this year.

MSF is also working in the Mali’s south. Teams are providing nutritional treatment and pediatric care in five health centers and in the Koutiala hospital.