In an MSF study, mortality rates were observed to be 50 percent lower among young children in Niger who received highly nutritious supplemental food. 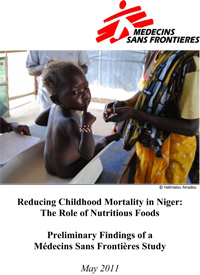 PARIS/NIAMEY, May 24, 2011 – Mortality rates were observed to be 50 percent lower among a large group of young children in the west African nation of Niger in 2010, after they received a highly nutritious supplemental food, according to preliminary findings in a study by the international medical humanitarian organization Doctors Without Borders/Médecins Sans Frontières (MSF).

The encouraging findings reinforce the need for international donors and policymakers to make high-quality foods a cornerstone of childhood health programs, especially in areas where malnutrition is rife.

Malnutrition weakens the immune system, exposing a child to higher risk of death from other illnesses, such as malaria, respiratory infections, and diarrhea. Adding a quality supplemental food to an essential package of care—including vaccination and effective treatment and prevention of primary ‘killer diseases’ of young children—will accelerate the fight against child mortality.

Last year in Muskoka, Canada, G8 member states committed to refocus efforts over the next five years to cut mortality rates of children under five years of age, by two-thirds from 1990 levels. At their meeting this week in Deauville, France, G8 members should commit to ensure that appropriate foods reach vulnerable children, MSF said.

“Our preventive strategies focused on getting a nutritionally appropriate food to children during the most crucial time—the critical window of six months to two years of age—instead of waiting for them to start losing weight, and we observed child mortality rates to be lower by half,” said Dr. Isabelle Defourny, MSF program manager for Niger. “If donors and policymakers are serious about reducing child mortality rates, then providing child-appropriate foods must be made a standard component of any pediatric program in the world’s ‘malnutrition hotspots’.”

At any given time, an estimated 195 million children are affected by malnutrition worldwide. It contributes to at least one-third of the eight million annual deaths of children less than five years of age.

For several years, MSF has been developing preventive approaches to malnutrition—based on quality supplementary foods—in order to lower the burden of deaths in ‘malnutrition hotspots’ such as in the Sahel region of Africa. The Sahel features child mortality rates among the highest in the world. During a severe food and nutrition crisis in 2010 in the Sahelian country of Niger, local authorities, together with MSF and the Nigerien organization FORSANI (Forum Santé Niger), implemented the largest-ever distribution of supplemental foods designed to prevent malnutrition in young children.

Between July and December, 2010, three-to-six-month supplies of a ready-to-use paste rich in milk, minerals, and vitamins were distributed to approximately 150,000 children—most between 6 months and 2 years-of-age—in five districts of the Tahoua, Maradi, and Zinder regions. Some of the children also benefited from protection rations (mainly cereals and fortified flours) provided by WFP. Pediatric healthcare for common childhood illnesses, such as malaria, and acute malnutrition, was also available in the distribution areas, including for the children who did not receive a nutritional supplement.

Epicentre, MSF’s epidemiology branch, conducted monthly surveys among a cohort of several thousand young children living in the distribution zones. All benefited from monitoring for signs of malnutrition and illness. Children requiring medical care were referred to MSF and its partners working within Nigerien health-care facilities.

The mortality rate was seen to be more than 50 percent lower among those who received the foods tailored specifically to the nutritional requirements of young, growing children.

“Providing young children with high quality nutritious foods has long been one of the foundational principles of successful malnutrition and child mortality reduction programs in Europe, Latin America and the United States, along with immunization, for instance,” said Dr. Susan Shepherd, MSF child nutrition advisor. “It’s time to stop applying different standards for children living in malnutrition hotspots. We can save children’s lives today if the appropriate resources are put behind similar interventions to those we deployed last year in Niger.”

Countries such as Mexico, Thailand, the United States, and many European nations, have successfully reduced early childhood malnutrition and mortality through programs that ensure infants and young children from even the poorest families have access to nutritious foods, such as milk and eggs. However, many food-insecure families cannot afford these animal-sourced foods, which contain the high-quality proteins, fats, and other essential nutrients that children require. National programs that fill this nutritional gap for young children are essential.

The development in recent years of a new generation of nutritional foods tailored to the needs of the most vulnerable children, which are simple to use, make possible the establishment of a new standard in childhood mortality prevention.

In 2010, in addition to malnutrition prevention activities, MSF and its partners, FORSANI and BEFEN / ALIMA, carried out pediatric and nutritional activities in 64 primary care facilities and nine hospitals in Niger’s Tahoua, Maradi and Zinder regions. Approximately 150,000 children suffering from malnutrition were treated—nearly half of all the malnourished children treated in the country in 2010—of whom approximately 24,000 were hospitalized. Between 85 and 92 percent of children were discharged. MSF and its partners also treated 216,330 cases of malaria among children less than five years of age, conducted more than 370,000 pediatric consultations, and admitted more than 13,000 children to hospital.