On May 20, MSF set up a stabilization center in the Shashemene region of southern Ethiopia to provide 24-hour medical care to children with complicated severe malnutrition—those at highest risk of dying who are suffering from additional conditions such as dehydration or malaria. Within days, the center had admitted over 200 children. Here, their caretakers describe the difficulties of the last few months. 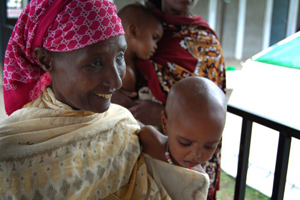 Fatuma holds her granddaughter Safiya at an MSF stabilization center in Shashemene region.

“I’m here with my granddaughter Safiya. Her mother is having another baby so she couldn’t come. She’s two years old. We came here on Wednesday. She’d been ill for three weeks with diarrhea and a fever. We had no money for the hospital, so we don’t go to that place. We haven’t had any food for the last six months, no maize and no potatoes. No rain. I work sometimes for other people. One of my sons has a good job and sometimes gives me money. But this year we have problems with food. 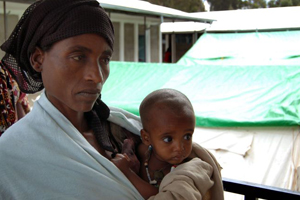 Amina holds one of her 12 children.

My twin boys were sick for one week with diarrhea, fever, and vomiting. We went to the hospital and they gave us a polio vaccination. Then we came here.

We don’t have land to farm. My husband used to work as a day laborer, guarding the food on the farms. But this year there hasn’t been any food, so he hasn’t had any work. We have 12 children. The oldest is 14 years old. They’re at home now; my brother-in-law is looking after them.

If they can find food, then they eat. If not, then they sleep with no food. We have had problems with food for the last six or seven years but this year is the worst. 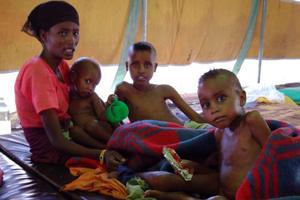 Geneme sits with her three children in the stabilization center.

I have three children and two of them are sick. We heard in Shalla that there is medicine for sick children in Shashemene, so I brought them here. Our problems are because there has been no rain. Before we came here we ate only maize. I used to sell things at the market and buy food, but everything became more expensive this year. Life became more difficult this year.

We have been in the center for 15 days. One of my children is getting better, but the other one is not improving. When my children are sick I get very angry with myself. They are sick because I can’t feed them, I don’t have food to give them. I will be happy to go home, but I’m worried because we have nothing to eat in the house. We will only have the food that we are given. 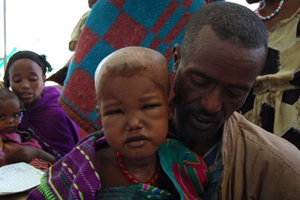 Kadir holds his daughter, Alemitu, who is suffering from kwashiorkor, a form of edema caused by malnutrition that manifests as liquid retention and can lead to death by heart failure.

My daughter Alemitu is sick because we don’t have any milk. The cows are very thin because there has not been any rain and they have no grass to eat. I have two wives and nine children. Alemitu’s mother is looking after the baby, so I am here to take care of her. I’ve never had a child sick from hunger before. She is getting better but she doesn’t like to drink the milk they give her.

We have some land, but not very much, and we live hand to mouth. The land here is very dry, so it’s common to have some problems with the rain, but this year is the worst. Our lives here depend on the rain, if there is enough rain then we can eat but if not then we go hungry. 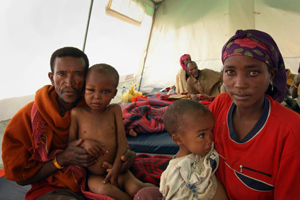 Mohamed holds his eldest son, who has kwashiorkor, while his wife holds their younger son at the MSF stabilization center.

My two sons are sick. The older one has been sick for a month, but we have had problems with food for two months now. Normally, I farm enough food for my family: potatoes, maize, wheat, and false banana (enset, a root crop in Ethiopia). This year we have been eating a lot of false banana.

The problem for most people is the lack of food and the lack of money. I did not have money to take my children to the hospital. I had to borrow money to bring them here*. The rain is coming in the future so food will grow, but we don’t know how long it will take. That is God’s will.

* MSF does not charge for medical services, but it is often difficult for patients to afford transportation to a medical facility.