While providing healthcare to undocumented migrants and asylum-seekers in detention centers in Malta, MSF remains concerned that landings have ground to a halt

MSF has resumed work in Ta’kandja detention center for migrants and asylum-seekers in Malta after authorities committed to enable the provision of effective medical care and to ensure adequate living conditions for detainees. About 60 percent of patients MSF has treated there are from Somalia. 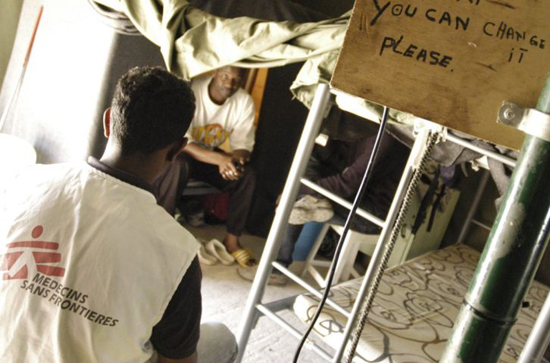 An MSF worker speaks with asylum-seekers in an open center for detainees in Malta.

After suspending its medical activities in detention centers for undocumented migrants and asylum-seekers in Malta in March 2009, Doctors Without Borders/Medecins Sans Frontieres (MSF) has resumed work in Ta’kandja detention center. The decision follows a commitment from Maltese authorities to enable the provision of effective medical care and to ensure adequate living conditions for detainees.

“We suspended our activities in detention centers in March because we felt it was impossible to offer adequate medical care under the circumstances,” said Gabriele Santi, MSF coordinator in Malta. “We could not dispense medication to treat our patients or isolate patients with infectious diseases. Because of the appalling living conditions, migrants often required repeated consultations for the same complaints, as symptoms persisted.”

The Maltese authorities addressed some of MSF’s requests following negotiations. “The current living and hygiene conditions in Ta’kandja allow our medical intervention to be effective and are not a direct threat to the health of migrants,” said Philippa Farrugia, MSF doctor in Malta. “In addition, following our requests, a suitable isolation area for patients with infectious diseases is being set up.”

In the first week since it resumed activities in Ta’kandja, MSF provided medical consultations to more than 100 patients. To identify the patients who are most in need of healthcare, an MSF team goes inside the living areas to carry out medical triage. MSF also organizes health promotion activities and will begin providing mental health services soon. There is a significant need for mental healthcare for many detainees, most of whom have endured harsh journeys to reach Malta and face uncertainty about their future in detention.

Undocumented migrants and asylum-seekers in Ta’kandja have had limited access to medical care since February, when the detention center was built to accommodate the growing influx of migrants to the island. “We are providing healthcare to this group of migrants who have had limited assistance for months,” said Santi. “At the same time, if more migrants arrive in Malta, our presence in Ta’kandja will enable us to do medical triage, identify those in need of urgent medical care after the harsh journey across the Mediterranean and provide the medical humanitarian assistance they need.”

“Our lives are wasted here. But we can’t go back.”

Boats brought more than 700 new migrants and asylum-seekers to Malta in the first two months of 2009, but landings in Malta have ground to a halt since the end of April. Likewise, the MSF team in Lampedusa, an Italian island 220 km (135 miles) from Malta where thousands of migrants land every summer, has not seen a single landing since April.

“This is a concern for MSF,” said Antonio Virgilio, MSF head of mission for Italy and Malta. “If migrants are being sent back to Libya directly from the sea without being given the opportunity to land in Italy or Malta, they are being denied humanitarian assistance and also the opportunity to apply for asylum. As border control mechanisms get increasingly restrictive, migrants start taking more risks and embarking upon more dangerous journeys.”

In Malta, 60 percent of the migrants treated by MSF medical teams between August 2008 and February 2009 were from Somalia. They cross the desert and the Mediterranean Sea in search of refuge and peace.

A.*, a 24-year-old from Mogadishu, was released from a detention center in Malta in September 2008 and transferred to one of the four open centers in Hal Far, where he now shares a tent with other migrants. Together with his girlfriend, he set off from Libya three times before their journey was successful and they made it to Malta. “We tried twice but just as we were leaving Libya our boat was intercepted and sent back. We were then put in prison. We didn’t have enough food or water and beating us up seemed to be the rule,” he said.

Between failed attempts to cross the sea, A. spent more than six months in different Libyan prisons. However, life in Malta is not what he expected. “In Malta I have no future, no life, no opportunity for development. We are all stuck. Our lives are wasted here. But we can’t go back,” he said.