Increasing numbers of people from Mali are entering a refugee camp in neighboring Mauritania, where health and living conditions are already poor. 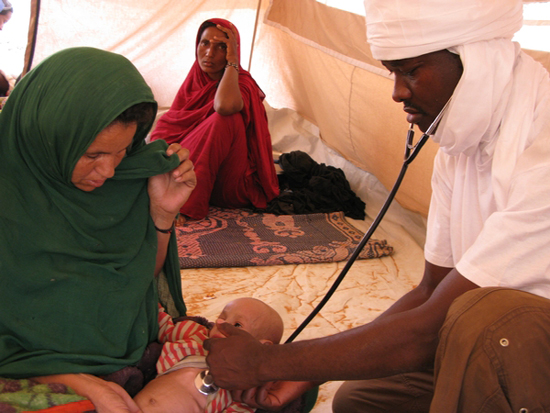 A Malian woman driven from her home by fighting watches as an MSF doctor checks on her child at the rapidly expanding Mbera camp in Mauritania.

At least 57,000 people from Mali have entered the Mbera refugee camp in Mauritania since late January. Roughly 1,500 people are arriving in the camp per day, up from 200 per day on April 5. Thousands more people are expected to arrive. In response to the massive influx, MSF is bolstering its activities and emergency medical aid in the desert area, where access to medical care is extremely limited.

Fighting between the Malian army, the Tuareg movement, and other armed groups is forcing thousands of people to flee to Fassala, Mauritania, located three kilometers from the border with Mali.

“The presence of armed groups and political uncertainty in Mali is generating fear and panic among the people,” said Elisabetta Maria Faga, MSF field coordinator. “Refugees are primarily Tuareg families from the Timbuktu region. They arrive here exhausted after a two-day journey by truck.”

The Mbera camp, run by UNHCR, the United Nations refugee agency, is in the heart of the Sahel region and a six-hour drive from the nearest hospital in Nema. MSF is providing primary and maternal health care to refugees and caring for malnourished children at the camp. MSF is also helping local populations by operating health posts in the region.

“A great number of people are suffering from respiratory infections and diarrhea due to a lack of access to water, exposure to extreme temperatures, and frequent sand storms,” said Jean-Paul Jemmy, MSF medical coordinator.

“We are still expecting several thousand refugees in the coming weeks,” said Jean-Paul Jemmy. “With this constant influx of refugees, we have to act quickly and efficiently to provide emergency services. We must provide sufficient shelter, water, and sanitary facilities; and reinforce overall emergency medical assistance,” he said.

Since February, MSF has held over 8,500 primary health care consultations in Fassala and Mbera (Mauritania). MSF has also been responding to the medical needs of Malian refugees in Niger and Burkina Faso. The organization is also working in the north of Mali (Timbuktu, Gao, Kidal, and Mopti), where it offers primary health care to people displaced by violence.