Migrants from sub-Saharan Africa are suffering a sharp increase in violence at the hands of security forces in Morocco and at border areas, resulting in serious health problems. 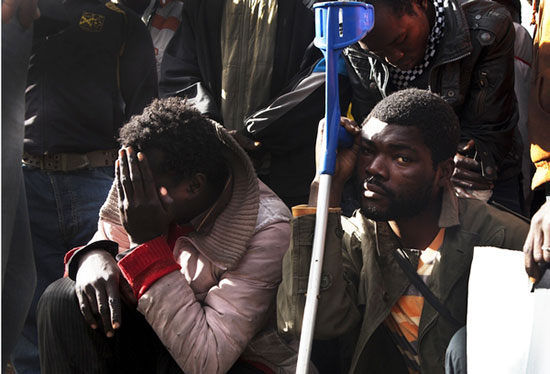 The number of people seen with injuries caused by the security forces, falling from the fence, or fleeing from the police has increased. 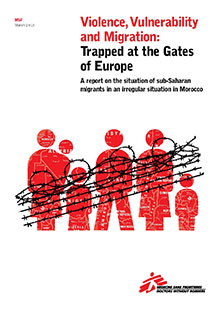 A report released today by MSF, Trapped at the Gates of Europe, documents the violence migrants are subjected to on a daily basis. Since December 2011, MSF teams have witnessed an increase in the number of police raids, during which migrants are beaten and their belongings destroyed. An increasing number of people are also being expelled to Algeria, including pregnant women, injured people, and minors.

“Since April last year we have seen people with broken arms, legs, hands, and jaws as well as broken teeth and concussions, amongst other injuries,” said David Cantero, MSF head of mission in Morocco. “The injuries documented by MSF are consistent with migrant accounts of attacks by security forces.”

The indiscriminate raids and expulsions constitute renewed acts of violence by Moroccan and Spanish security forces to dissuade migrants from climbing fences surrounding the Spanish territory of Melilla. In 2012 alone, MSF teams in Oriental region, near Melilla, treated more than 1,100 injured people.

The stringent border controls are forcing more people to remain in Morocco, where they are vulnerable to abuse at the hands of authorities are denied specialized care and protection from the authorities.

“Renewed cooperation between Morocco and Spain, which, according to the parties, is focused on the fight against cross-border crime, illegal migration, and drug trafficking, is having a serious impact on the physical and mental health of sub-Saharan migrants,” Cantero said. “Migration policies privilege internal security criteria over respect for fundamental human rights.”

One of the most urgent problems outlined in the report is sexual violence, experienced for the most part by migrant women and girls. While it is impossible to determine the full extent of this violence, MSF’s medical data reveal an alarming situation: from 2010 to 2012, MSF teams provided specialized treatment to close to 700 survivors of sexual violence.

The report also reveals the difficult circumstances endured by sub-Saharan migrants, many of whom are forced to live in precarious conditions in the open and to beg in order to survive. Almost half of the 10,500 medical consultations conducted by MSF teams between 2010 and 2012 were for pathologies related to poor living conditions. Many patients also show symptoms of anxiety and depression, among other mental health conditions.

While civil society and nongovernmental organizations, together with Morocco’s Ministry of Health, provide some health services to migrants, there is an overall lack of mental health services and comprehensive care for survivors of sexual violence, for both migrants and Moroccans. Some migrants are also reluctant to visit health centers, for fear of expulsion from the country.

MSF urges the Moroccan and Spanish governments to cease the abuse perpetrated by their respective security forces, comply with international and national human rights agreements, and guarantee that sub-Saharan migrants are treated humanely, regardless of their legal status.

MSF teams in Morocco have increasingly found themselves confronted with medical and psychological needs that stem from a lack of protection and an abuse of sub-Saharan migrants' fundamental human rights. MSF is handing over it activities in Morocco and, at the same time, calling for concrete action to address the contradiction between policies that view migration through a security lens, and those that protect and uphold human rights. The involvement of Moroccan associations and civil society will be crucial if long-term change is to be achieved.

MSF has worked in Morocco since 1997. Since 2003 the organization has focused its operations on guaranteeing access to health care for migrants. MSF handed over its activities in Rabat in 2012 and is currently handing over its remaining operations in Oujda and Nador.