Though its own facilities were severely damaged by the massive earthquake that struck Haiti on January 12, Doctors Without Borders/Médecins Sans Frontières (MSF) field staff is establishing temporary clinics in order to treat injured men, women, and children. MSF was able to respond immediately because international and national staff had already been running several projects in country. These include: 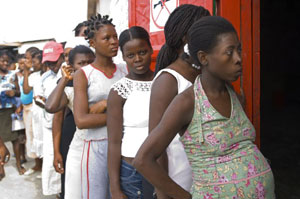 Pregnant women wait to see MSF staff at a mobile medical clinic in the La Saline area of Port-au-Prince.

In March 2006, in response to high levels of maternal mortality, MSF opened an emergency obstetric hospital in Port-au-Prince, Haiti’s capital. Jude Anne Hospital aimed to assist women living in the poorest neighborhoods of the city, women who otherwise had little access to emergency obstetric care. Initially, MSF projected that it would handle 300 births each month. In September 2006, hospital staff delivered 1,300 babies, about one every half hour. This unexpected surge in births made it clear that a larger structure was necessary. In February 2009, MSF opened a new hospital, Maternité Solidarité, with the capacity to better serve women in need of emergency obstetric care.

In addition, teams of outreach workers regularly visited the slums of Port-au-Prince, teaching expectant mothers to look for signs, such as bleeding or unusual headaches, that they needed emergency care. HIV testing and treatment, along with psychosocial counseling, were made available, and two mobile clinics offered antenatal care for mother and child alike. Since opening the emergency obstetric program in Port-au-Prince, MSF has delivered over 40,000 babies—a figure that clearly indicates the ongoing need for emergency obstetric care. 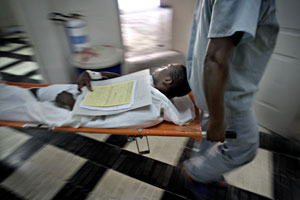 A patient is brought into MSF's 60-bed Trinité Trauma Center in Port-au-Prince.

MSF runs the only functioning trauma center in Port-au-Prince, the Trinité Trauma Center. In 2008, MSF field staff there treated 17,950 patients in the emergency room and performed surgery for another 6,196 people. Among them were approximately 45 gunshot victims each month, people injured during food riots that occurred in April of that year, and children and adults wounded when a school collapsed that November. 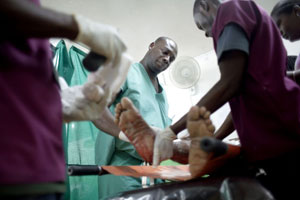 In April 2005, MSF increased its capacity to treat victims of sexual violence in Port-au-Prince, offering comprehensive psychological and medical treatment for those in need of it. The program treated 468 patients in 2008, half of whom were under the age of 18. This component of the project was handed over to local hospitals working with Médecins du Monde in September 2009.

In December 2006, MSF began working in the slum of Martissant, in Port-au-Prince, assisting a population affected by violence and unable to access medical care elsewhere. The medical team has an emergency room where they stabilize patients and refer those in need of surgery or hospitalization to other health facilities in the city. In 2009, MSF teams were receiving an average of 8,000 patients in the emergency rooms every month.

For more on MSF's history in Haiti see our annual Activity Reports.