Following the outbreak of violence in the breakaway region of South Ossetia, and subsequent attacks by the Russian army on Georgian territory, MSF is preoccupied with the situation of thousands of people who have fled the conflict, and is alarmed at the possible interruption of treatment for drug-resistant tuberculosis (TB) in programs in Georgia and the breakaway enclave of Abkhazia.

Assessing the refugee situation north of the Russian border

Two MSF assessment teams arrived in the region of North Ossetia this past weekend, where the main flow of people fleeing the violence from South Ossetia was expected. Although numbers are difficult to establish, there are clearly many people escaping from the conflict zone, heading mainly to the Russian province of North Ossetia, but also to other regions within Georgia.

The teams are assessing the needs of displaced people and are prepared to provide staff support, as well as medical kits and other relief items. Currently, the needs of those who sought refuge in North Ossetia appear to be met by Russian health authorities and the emergency organization Emercom. MSF will also try to gain access into South Ossetia, which is currently inaccessible.

MSF is also present in Georgia and Abkhazia, to provide health care to patients affected by drug-resistant TB. The teams are preparing themselves to provide support to hospitals in Georgia and to evaluate the needs of the people who have been displaced by the conflict.

Our team in Tbilisi, the capital of Georgia, will support several hospitals in the country, providing medicines for patients who have been injured and suffered burns, in collaboration with the health authorities of Georgia. The hospitals in various regions of the territory have admitted close to 1,200 injured patients who are being cared for by Georgian doctors.

Other evaluations will be conducted on Wednesday August 12, in the internally displaced-persons (IDPs) camps located around Tbilisi. There are three camps in the city and five surrounding the capital, each with a few hundred IDPs.

Our team will also attempt to access South Ossetia to pursue evaluations, but the region remains inaccessible for the time being.

Concerns relating to the provision of resistant-TB programs 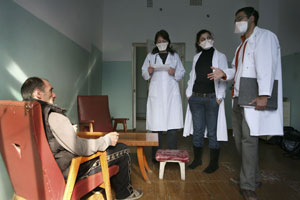 The on-going treatment of patients affected by multi-drug-resistant tuberculosis (MDR-TB) is of key concern to our teams. Suspending a TB program for even a few days can have dire consequences on the health of patients.

For the time being, the two MSF MDR-TB programs will continue. In Sukhoumi (Abkhazia), our team is still providing treatment to 80 patients in the hospital and to other through seven mobile clinics. In Zugdidi, Georgia, where close to 120 people are under treatment, MSF international staff have evacuated the city, while local teams remain present in the health structures to provide care. Despite their presence, three patients have already left the hospital, which will probably have a negative consequence on their treatment. As tuberculosis is a contagious disease, their departure may also pose a serious health risk for those with whom they come into contact.

The teams in Sukhoumi and Zugdidi still have each two weeks worth of medical supplies for treating MDR-TB. In two weeks time however, they will have run out of one of the drug molecules (PAS), which will negatively affect the continuity of treatment for patients.