MSF Calls for Respect of Civilians in Northern Mali

All parties to the conflict in Mali must avoid harming civilians and health structures, MSF announced today. 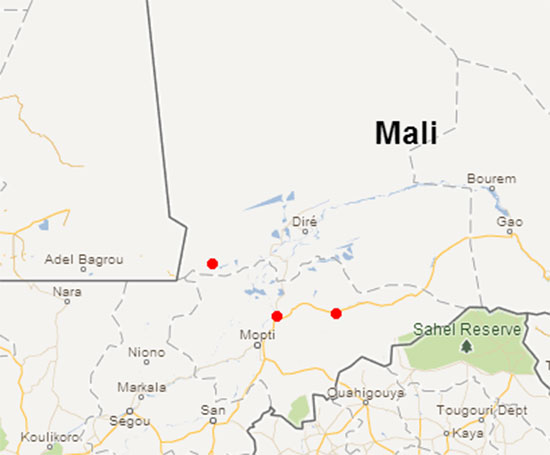 From left, the towns of Lere, Konna, and Douentza, where armed conflict is hampering the provision of medical aid.

Along with continuing to run its existing programs in Mali, Doctors Without Borders/Médecins Sans Frontières (MSF) teams are prioritizing attempts to reach the outskirts and the town of Konna, in the center of the country.

MSF is negotiating to obtain access to the region in order to assess medical and humanitarian needs there. If access is attained, MSF plans to set up a mobile clinic system. The team will also be able to transfer wounded patients to the city of Mopti, where MSF has been working for several months.

Yesterday in Douentza, the MSF team working in the local hospital took shelter there for most of the day, waiting for bombing to stop. The team did not receive any wounded patients following the attacks.

MSF is also organizing mobile clinics on the outskirts of the city of Gao. An MSF team is also working at the Ansongo hospital, 100 kilometers south of Gao.

Concern for the Displaced Populations

MSF is also concerned about the fate of civilians fleeing the interior of the country and new refugees arriving in the neighboring countries of Mauritania, Niger and Burkina Faso.

MSF reports that more than 400 new refugees have also arrived in Burkina Faso and Niger.

Civilians have been affected by armed conflict over the last few days in Konna and by bombardments in Lere and Douentza, a town in the northeast of Mali's Mopti region. An MSF medical team is supporting medical activities in a hospital in Douentza.

“Because of the bombardments and fighting, nobody is moving in the streets of Douentza and patients are not making it through to the hospital,” said Rosa Crestani, MSF emergency response coordinator. “We are worried about the people living close to the combat zones, and we call on all the parties to the conflict to respect the safety of civilians and to leave medical facilities untouched.”

On January 10 and 11 MSF received reports of numerous deaths and injuries from armed conflict in Konna, including civilians, according to Dr. Mego Terzian, MSF’s manager for the emergency response in Mali.

MSF has brought in two truckloads of supplies and drugs for medical facilities in the Mopti region. Many residents of the Mopti region have fled the fighting, turning some communities into virtual ghost towns. MSF is working to locate displaced people and set up mobile clinics to provide medical assistance.

Following the bombardments in Lere, to the north of Mopti, several hundred people have crossed the border into Mauritania. MSF teams in Mauritania have initiated their emergency response plan and are currently on site providing assistance to these refugees.

“Already 200 refugees have arrived by car or truck in the Fassala camp, in Mauritania,” said Karl Nawezi, head of MSF’s programs in Mauritania. “The latest arrivals have told us that there are many more refugees who were unable to find a vehicle and who are fleeing on foot towards the border.”

Bombardments also took place over the weekend in the towns of Gao and Ansongo, in Gao region. MSF is providing emergency and primary health care in a hospital in Ansongo and is supporting health centers, one on the outskirts of Gao town. It also operating a mobile clinic in the region.

MSF is continuing other efforts to provide medical supplies, drugs and other medical and surgical support in areas close to the conflict zones.

MSF’s teams in Mali include approximately 450 Malian and 50 international staff. For the last several months, they have been working in Mali in the regions of Gao, Timbuktu and Mopti, providing primarily surgical and medical care and nutritional services. MSF is also working in the southern part of the country, with nutritional activities in the region of Koutiala, and with Malian refugees in the neighboring countries of Mauritania, Niger and Burkina Faso.