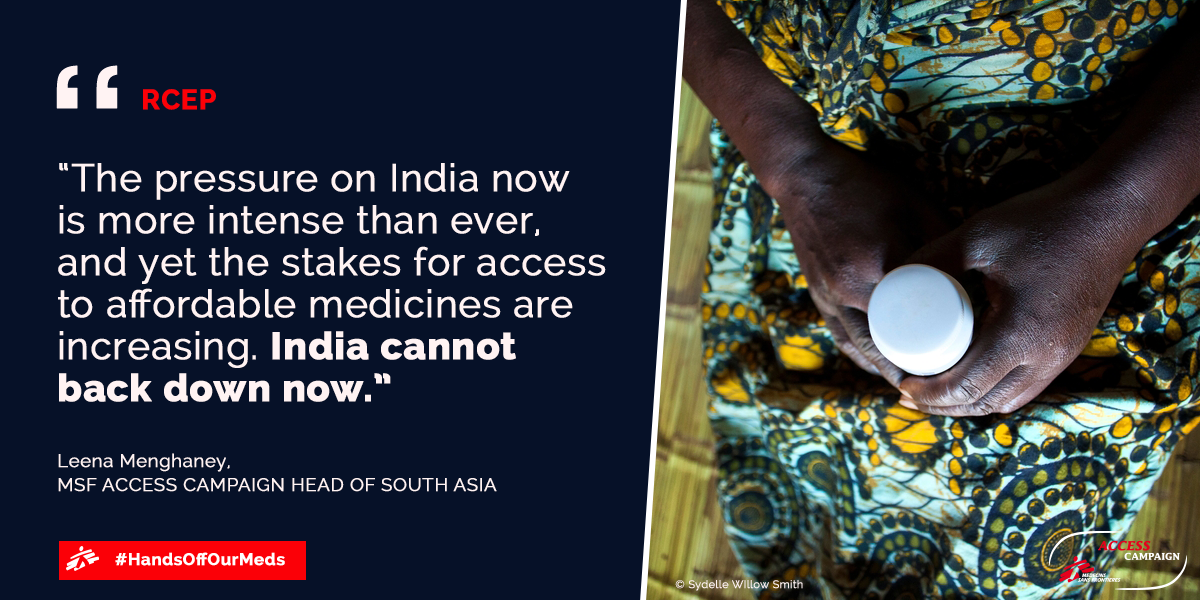 New York/New Delhi/Geneva—In advance of the next round of the Regional Comprehensive Economic Partnership (RCEP) negotiations starting in Perth, Australia, this Sunday, the international medical humanitarian organization Doctors Without Borders/Médecins Sans Frontières (MSF) is warning that current proposals in this trade agreement could severely restrict access to affordable medicines for millions of people around the world. Text from a leaked chapter on intellectual property shows that Japan and South Korea have made proposals that go beyond what international trade rules require, undermining access to affordable generic medicines and making it harder for patients and treatment providers like MSF to access affordable, lifesaving medicines.

"Proposals in the RCEP negotiations are trying to introduce intellectual property measures far tougher on access to medicines than what is required under international trade rules," said Leena Menghaney, South Asia head of MSF’s Access Campaign. "If accepted, the agreement would restrict access to affordable generic medicines for people in many countries that will be part of the agreement—including Indonesia, Thailand, Myanmar, Cambodia, and Laos—and for the millions of people around the world who rely on lifesaving affordable generic medicines from India."

The measures that would harm access to affordable medicines are especially worrisome given India is one of the countries included in the RCEP negotiations. India, often known as the "pharmacy of the developing world," for its wide-scale production of generic medicines, supplies lifesaving affordable medicines needed to treat communicable and non-communicable diseases in developing countries. Two-thirds of all the drugs MSF purchases to treat HIV, tuberculosis, and malaria are generic medicines from India.

"Many of the intellectual property provisions that have been tabled mirror those in the Trans-Pacific Partnership agreement (TPP), considered the worst trade deal ever for access to medicines," said Brian Davies, East Asia head for MSF’s Access Campaign. "Countries that did not join the TPP—particularly India and key members of the Association of Southeast Asian Nations (ASEAN)—will be pushed to adopt similar standards in the RCEP negotiations."

In Perth, India will be under increasing pressure to roll back some of the hard-fought protections for access to medicines that have been secured by its negotiators in past trade agreements. They have stood firm against the most harmful provisions—such as extended patent terms and data exclusivity—which had been proposed but rejected both in the India-Japan Comprehensive Economic Partnership Agreement, and the ongoing negotiations for an EU-India Free Trade Agreement.

One of the most damaging measures is data exclusivity, which gives companies monopoly rights on drugs by restricting the use of clinical trial data by drug regulators when approving generic drugs or "biosimilar" versions of drugs and vaccines. Data exclusively would act like a patent to block the entry of more affordable generic medicines to the market, even for drugs that are already off patent, or do not deserve a patent to begin with. Other clauses harmful to access to medicines remain on the table, including extending patent terms, and introducing controversial aspects of intellectual property enforcement without the safeguards needed to prevent abuse and protect access to medicines.

"If the measures in this agreement prevent people from getting the generic medicines they need, the health consequences for any delay or interruption of treatment for many diseases, like HIV, could be serious," said Dr. Greg Elder, medical coordinator for MSF’s Access Campaign. "Ninety- seven percent of the HIV medicines MSF uses to treat 230,000 people living with the disease are generics sourced from India. The reality is, without generic medicines, we wouldn’t be able to treat as many people as we do. We urge Indian and ASEAN negotiators to make sure the terms of any trade agreement reached do not impede the supply of generic medicines upon which we and so many people in developing countries rely."