The MSF emergency response to an outbreak of Ebola in Uganda has come to an end. 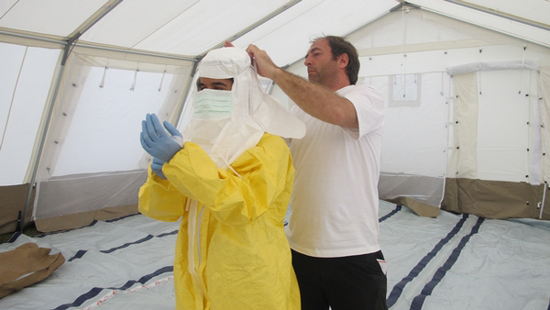 The Doctors Without Borders/Médecins Sans Frontières (MSF) emergency response to an outbreak of Ebola in Uganda has come to an end. The MSF team handed over the Ebola treatment center it set up in Uganda’s western Kibaale district to the Ugandan Ministry of Health (MoH).

After the outbreak was declared in late July, MSF’s emergency team responded by setting up the treatment center in Kagadi hospital, implementing measures to prevent the disease from spreading, and training Ugandan health staff on caring for patients while minimizing the risks of contagion. The team also gave technical and logistical support to the MoH by providing psychosocial care to patients, families, and health staff, and educating the community about the disease.

As part of a preparation plan for future outbreaks, MSF also restored a treatment unit in Mulago hospital, located in Kampala, Uganda's capital. “Uganda has developed the capacity to respond to Ebola emergencies,” said MSF emergency coordinator Olimpia de la Rosa. “We can rely on the capability of Ministry of Health staff to take over and manage Ebola cases with all safety guarantees.”

This latest outbreak of Ebola claimed 17 lives. After the treatment center was set up, 69 suspected and five confirmed cases of Ebola were reported. However, there have been no confirmed cases since August 3. An Ebola outbreak is officially considered over once 42 days have elapsed without any new confirmed cases.

The Ebola epidemic appears to have been successfully contained thanks to the combined efforts of the Ugandan MoH, MSF, the US Centers for Disease Control, the Ugandan Red Cross, and the World Health Organization. The experience these organizations gained from dealing with the outbreak is likely to improve future responses.

There is no treatment or vaccine for Ebola hemorrhagic fever. It was detected for the first time in humans in 1976 in Zaire (now the Democratic Republic of Congo). It is transmitted through bodily fluids and has a mortality rate between 25 percent and 90 percent, depending on the strain. However, some patients make full recoveries.