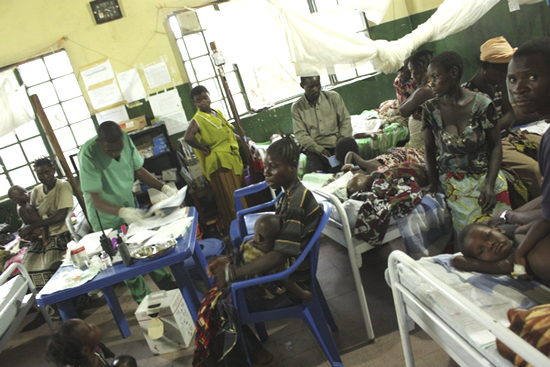 After a four-month intervention during which Doctors Without Borders/Médecins Sans Frontières (MSF) treated nearly 40,000 malaria patients, MSF has handed over its emergency malaria project in Kinkondja—a remote area in the Katanga province of the Democratic Republic of Congo (DRC)—to the Congolese Ministry of Health (MoH).

“During our short intervention, MSF treated almost 40,000 men, women, and children for malaria,” said Melanie Silbermann, MSF’s medical coordinator in Lubumbashi. “When we arrived, one in ten of our patients required immediate hospitalization. In the last weeks of our intervention, this was down to one in 100.”

MSF initially sent a temporary team to Kinkondja to deal with a cholera outbreak in the area. The team treated more than 1,000 patients for cholera symptoms and then realized, in part because of the frequent singing and drumming that accompanies funerals in the area, that large numbers of children were dying from malaria.

In response, MSF immediately deployed an emergency medical team to run mobile clinics in the area. Local health centers were supplied with rapid diagnostic tests and artesunate-combination therapy (ACT) medicine to catch and treat the disease in its early stages.

In the local hospital, MSF worked alongside MoH staff to treat severe malaria patients requiring hospitalization. There were times when more than 100 patients were admitted in the space of a single week. Most were children under 5 years of age, most arrived in critical condition, and more than half of them needed blood transfusions. MSF supported the laboratory to ensure that these transfusions were carried out safely.

Malaria is endemic in DRC and remains the leading cause of death for children under five in the country. There are few health care providers in Katanga province, and the local health system is overstretched, meaning most people are vulnerable to malaria.

MSF’s emergency response is saving lives in the short term, but the organization cannot address the crisis in the long-term alone. MSF calls on the Congolese government and national and international health actors to take rapid and sustainable measures to prevent and treat malaria and put a stop to avoidable deaths.