MSF Hands over Hospital Management in CAR to Ministry of Health

MSF has handed over the management of a hospital in Maitikoulou, Central African Republic, to the Ministry of Health 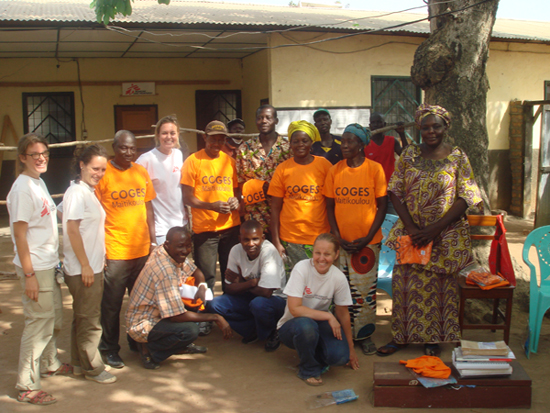 MSF and COGES staff at the MSF hospital in Maitikoulou.

Doctors Without Borders/ Médecins Sans Frontières (MSF) has handed over the management of a hospital in Maitikoulou, Central African Republic (CAR), to the Ministry of Health. The project opened in 2008 to combat human African trypanosomiasis (HAT), a neglected tropical disease known as "sleeping sickness." For three years, MSF teams tested and cared for people suffering from the fatal disease. Originally dedicated solely to the testing and treatment of HAT, the project gradually evolved into a 70-bed hospital with an outpatient department, a maternity center, a therapeutic feeding program, and an expanded immunization program (EPI). MSF also expanded beyond the hospital to health posts including Kadjama-Kotta, Bele, and Dokabi and Mainodjo. After many active screening tests for HAT in villages around Maitikoulou, MSF teams have confirmed that the disease is under control in the area with a prevalence below 0.5 percent in 2011, compared to 5.9 percent in 2008.

In the last round of active screening, in late fall 2011, MSF sent its mobile HAT team, composed of a coordinator, physician, laboratory technician, and logistician, to the border of the Central African Republic and Chad. As team physician Andreas Lindner explains, the outcome was encouraging. "The testing was a continuation of activities that began in 2008 and 2009, and cases have declined. In 2009 we identified more than 1,000 cases in this region, and this time we only found several suspected cases, but they were not, in the end, identified with the parasite. It was a good result as it shows the work we did in the past was very efficient." Following the reduced prevalence of sleeping sickness, MSF decided to refocus its activities on malaria, the most important illness and cause of death in the area. MSF reduced activities, closing the health post in Kadjama Kota in July 2011 and the health post in Mainodjo in August 2011. MSF has been working to hand over the health posts in Dokabi and Bele as well as the hospital in Maitikoulou to local communities since December 2011, with their respective health committees (COGES) recognized by the Sous-Prefecture and the Regional Health Directorate.

The handover will be phased in throughout 2012. “During the first months of the year we will work hand in hand with COGES. I am hoping that from 2013 and onwards COGES will be more independent and they can develop and work without the support of MSF," said Corinne Grant, MSF project coordinator in Maitikoulou.

In 2012, MSF will support COGES to ensure treatment of malaria in Dokabi, Bele, and Maitikoulou. MSF will continue to provide technical supervision in these three health facilities: the national and international staff of MSF will conduct monthly visits to the "malaria sites" of Bele, Dokabi, and Maitikoulou to continue training COGES staff and supervise and ensure compliance with health protocols. "I think the important thing is to reinforce the operational capacity of the members of COGES. I'm glad that there will be a nurse who will stay and who will help the COGES to work well," said Dr. Placide Wol-Wol, an MSF doctor. The second type of support to COGES is logistical support in terms of drug supply. "MSF has provided a lot of medicine to COGES to continue its medical activities; however, COGES still needs to find a long term solution for drug supply," said Ousman Noudjtoloum, health worker and a member of the Maitikoulou COGES. MSF will also provide the transfer of patients with severe malaria to the MSF hospital in Boguila.

Meanwhile, MSF will continue to engage in advocacy with the Ministry of Health to ensure that access to health care is maintained in this remote area on the longer term.

Médecins Sans Frontieres (MSF) is an international humanitarian NGO neutral, impartial and independent of any political, economic or religious influence. MSF has worked in CAR since 1997.