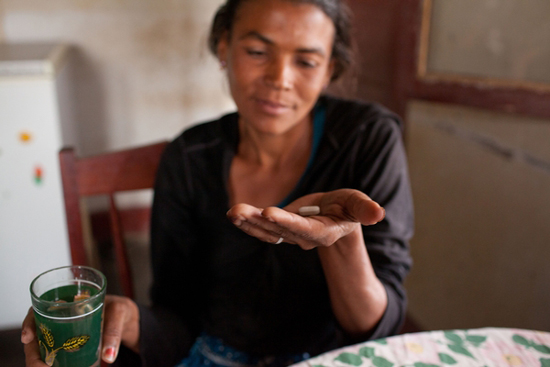 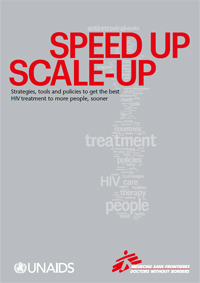 WASHINGTON, DC JULY 24, 2012—A first-of-its-kind study released today at the International AIDS Conference by Doctors Without Borders/Médecins Sans Frontières (MSF) maps progress across 23 countries on HIV treatment strategies, tools, and policies needed to increase treatment scale-up. The results show that governments have made improvements to get better antiretroviral treatment (ART) to more people, but implementation of innovative community-based strategies is lagging in some countries.

The study, a collaboration with UNAIDS, looks at 25 indicators in each country, ranging from coverage of ART and prevention of mother-to-child transmission (PMTCT), to whether nurses instead of doctors can start patients on HIV and TB treatment—critical to relieving the burden on health systems and to getting treatment further into communities—and how many health facilities in each country offer ART.

Read the Report:
SPEED UP SCALE-UP: Strategies, Tools and Policies to Get the Best HIV Treatment to More People, Sooner

“What we’re seeing is that governments are working to get better HIV medicines to their people, and to provide treatment closer to home so that more people can benefit,” said Sharonann Lynch, HIV policy adviser for MSF’s Access Campaign. “But there’s still a long way to go. More countries need to shift policies to allow nurses to start people on treatment, and other health workers to monitor patients’ treatment so treatment can be available in every clinic, in every village, in every country struggling with HIV.”

Main findings of the study include:

“One of the biggest questions posed at this conference is whether it will be feasible to reach the number of people in need of treatment in order to start reversing the epidemic,” said Dr. Tom Decroo of MSF-Mozambique. “There's a lot of talk about efficiencies at this conference, but we have to make sure the patient doesn’t get lost in this discussion. Moving treatment down to the community level means the interest of patients and health systems overlap. We’re showing that we can take HIV care out of hospitals and keep people healthy while making life easier for patients and easing the strain on the health system. We’re starting to move toward a model of patient care similar to that of chronic disease management in developed countries.”

MSF has implemented treatment models that put people at the center of their care, such as in Tete, Mozambique, where neighbors gather in groups of six and take turns collecting medicine refills for the group; or "adherence clubs" in Khayelitsha, South Africa, where stable patients receive treatment from adherence counselors in groups of 20, where the whole group can be done with a checkup in under two hours; or in the Democratic Republic of Congo, where people living with HIV manage HIV drug distribution directly in the community. These models are outlined in the new MSF and UNAIDS report, Closer to Home.

Better tools to get ahead of the wave of new infections are equally critical. All countries in the survey have shifted policies to provide better-tolerated ARVs to people, although implementation can depend on availability of funding. But only four of the countries in the survey have access to viral load testing, which is the gold standard in treatment monitoring and is routine in developed countries.

“I am one of eight million people living with HIV who have access to life-saving treatment,” said Charles Sako, who works in MSF’s clinic outside of Nairobi, Kenya. “But for every person like me, there is one more person who doesn’t have the medicines they need to stay alive. We must not tire in pushing governments to implement the best strategies, tools, and policies to get treatment to as many people as possible, as fast as possible. And we must appeal to all donors to keep supporting this vital global effort.”