As the European Commission (EC) resumes negotiations today on a trade agreement with India that could block access to lifesaving generic medicines, MSF launches a global campaign to stop Europe’s multiple attempts to restrict access to these medicines for patients across the developing world. 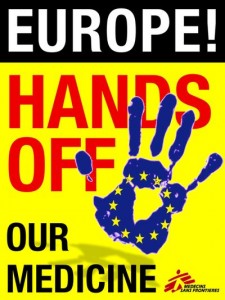 Europe is the driving force behind a number of different moves that risk blocking access to life-saving, affordable generic medicines for patients in developing countries.

Send an email to the European Trade Commissioner Karel De Gucht to get his HANDS OFF our medicines.

Brussels/New Delhi, October 7, 2010—As the European Commission (EC) resumes negotiations on a trade agreement with India that could block access to life-saving generic medicines, the international medical humanitarian organization Doctors Without Borders/Médecins Sans Frontières (MSF) is launching a global campaign to stop Europe’s multiple attempts to restrict access to these medicines for patients across the developing world.

“We depend on access to affordable generic medicines like those produced in India to treat all kinds of diseases,” said Dr. Unni Karunakara, president of MSF’s international council. “We buy 80 percent of our AIDS medicines from India—medicines that keep 160,000 people alive today.  On their behalf, we cannot remain silent as Europe works to close the door on every aspect of drug supply: the production of a generic medicine; its registration; and its transportation to patients in other parts of the world. So today we are launching a campaign demanding ‘Europe! HANDS OFF our medicine.’”

For more information about the campaign go to: action.msf.org

The India-EU agreement is just one of many attacks on generic medicines currently being undertaken by the EC.  Through other bilateral trade agreements around the world, Europe is threatening the production of safe, effective and affordable medicines by demanding tougher intellectual property provisions than anything required under international law. Europe is also a driving force in the secret negotiations for an Anti-Counterfeiting Trade Agreement, where it is leading the push for measures that would put limits on the generic production of medicines.

Already, the impact of these policies has been felt by patients.  Under EC customs regulations, legitimate generic medicines destined for developing countries have been detained in European ports, putting the lives of patients at risk.

“What the Europeans are doing is effectively snatching the medicines out of our hands,” said Dr. Marius Müller, MSF medical coordinator in Kenya. “Because generic medicines are more affordable, we have been able to put more and more patients on AIDS medicines. This has meant a lot of hope for our patients who can work again, who can bring up their children again. But if Europe has its way and shuts off this source, we risk killing the success of what has been achieved here in the last five years.”

A recent study found that up to 90 percent of certain AIDS medicines bought in 2008 by international donors—including by European governments—was sourced from generic producers in India. Shutting down this supply of affordable medicines would be devastating for the millions of people who are currently on, or awaiting, treatment.

“Europe is clearly taking every opportunity it can find to shut off the tap of affordable generic medicines for people in developing countries,” said Michelle Childs, of MSF’s Campaign for Access to Essential Medicines. “Together with civil society groups in this fight across the world, we are asking Europe to back off now, and we’re asking everyone, everywhere, to support our campaign, to send a message to the European Trade Commissioner, Karel De Gucht, to get his hands off our medicines.”