MSF launched the Patent Opposition Database as part of the campaign to boost access to medicines in countries where patients can't afford the high drug prices some companies seek to preserve. 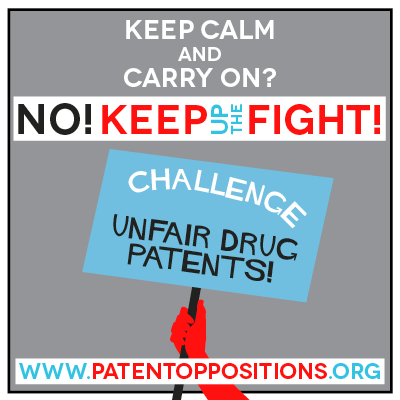 Geneva, October 5, 2012 – The international medical humanitarian organization Doctors Without Borders/Médecins Sans Frontières (MSF) has launched an online resource to help civil society and patient groups in developing countries challenge unwarranted drug patents. MSF’s Patent Opposition Database comes as many developing countries are facing dramatically high drug prices because patents are blocking the production of lower-cost generic versions of medicines. MSF relies on affordable medicines for its medical work in more than 60 countries; in the case of HIV treatment, over 80 percent of medicines used in developing countries are generics.

The Patent Opposition Database is accessible at patentoppositions.org.

“Drug companies routinely apply for patents or are granted monopolies on medicines even when these aren’t actually deserved,” said Michelle Childs, Director of Policy Advocacy for MSF’s Access Campaign. “It’s a myth that every patent application that is filed is valid. When you look closely, a patent application may fail one or more of the legal tests it needs to pass. The idea behind this database is to help civil society and patient groups stop unwarranted patents from blocking people’s access to more affordable medicines.”

A ‘patent opposition’— a legal challenge to prevent or overturn the granting of an unwarranted patent — is allowed under international trade rules as a way to keep checks and balances on pharmaceutical patenting. In countries where patents have been challenged, such as Thailand, Brazil or India, patent oppositions have successfully prevented undeserved patent monopolies from being granted and allowed generic competition to bring the price of medicines down.

"Due to the volume of applications, local patent examiners can miss information and grant unjustified patents," explains Vikas Ahuja, President of Delhi Network of Positive People. "Just putting two or three separate pills into one, or using known industry practices to formulate a drug, should not be considered innovative enough to warrant a new 20-year patent, for example. By filing patent oppositions, we can highlight this information and the possibility of invalid patents being granted is reduced."

Successful examples include the opposition by Indian groups to GlaxoSmithKline's patent application in India on the HIV fixed-dose-combination zidovudine/lamivudine, on the grounds that it was not a “new invention” but simply the combination of two existing drugs. This combination is now widely used in HIV treatment in developing countries. A pre-grant opposition filed by the Cancer Patient Aid Association also spurred the rejection of the Novartis patent application of the salt form of imatinib, on the basis that the medicine was merely a new form of an old medicine. The move—which is now the subject of a challenge before the Supreme Court—opened up generic competition on the drug used in the treatment chronic myeloid leukemia and brought the price down by 92 percent, from over $2,158 per month to $174 per month.

“An unwarranted patent not only delays the entry of price-lowering competition, it also undermines the drive for genuine innovation,” said Michelle Childs. “With very few innovative new drugs in their product pipelines, pharmaceutical companies desperately want to stave off generic competition by trying to get more patents on old molecules, or on processes that are not new.”

The Patent Opposition Database aims to guide civil society groups through the process of challenging an unjustified patent. It will allow organizations to forge new alliances and share vital specialist knowledge, as a patent application can often be challenged in different countries on the same basis. It contains a searchable listing of 45 patent oppositions relating to key medicines and over 200 other supporting documents that will aid in the building of future patent oppositions. The resource will grow as more data is added.

The launch of the database marks the ten-year anniversary of the first time a patent opposition filed by a patient group—Thailand’s AIDS Access Foundation—successfully overturned an unfair patent on the HIV drug didanosine in the Thai courts.

“At the time, we didn’t have much of a choice but to try and oppose the patent—unaffordable prices meant antiretroviral treatment in developing countries was still scarce, so it was our lives on the line,” said Nimit Tien U-dom, Director of the AIDS Access Foundation, speaking at a protest in Bangkok to mark the tenth anniversary of the didanosine lawsuit.