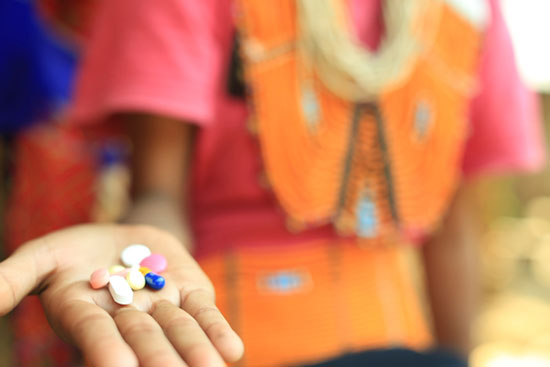 An MDR-TB patient shows her medicines. 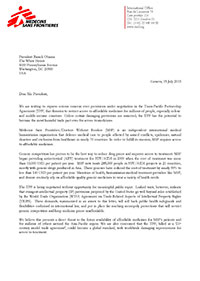 As the next round of the Trans-Pacific Partnership Agreement (TPP) negotiations continues in Malaysia, MSF urges negotiating countries to reject provisions that threaten to restrict access to affordable medicines for millions of people. The following letter was sent to heads of governments, ministers of health and TPP lead negotiators for all countries currently involved in TPP, including Japan.

We are writing to express serious concern over provisions under negotiation in the Trans-Pacific Partnership Agreement (TPP) that threaten to restrict access to affordable medicines for millions of people, especially in low- and middle-income countries. Unless certain damaging provisions are removed, the TPP has the potential to become the most harmful trade pact ever for access to medicines.

Generic competition has proven to be the best way to reduce drug prices and improve access to treatment. MSF began providing antiretroviral (ARV) treatment for HIV/AIDS in 2000 when the cost of treatment was more than 10,000 USD per patient per year. MSF now treats 285,000 people in HIV/AIDS projects in 21 countries, mostly with generic drugs produced in Asia. These generics have reduced the cost of treatment by nearly 99% to less than 140 USD per patient per year. Ministries of health, humanitarian medical treatment providers like MSF, and donors routinely rely on affordable quality generic medicines to treat a variety of health needs.

The TPP is being negotiated without opportunity for meaningful public input. Leaked texts, however, indicate that stringent intellectual property (IP) provisions proposed by the United States go well beyond rules established by the World Trade Organization (WTO) Agreement on Trade-Related Aspects of Intellectual Property Rights (TRIPS). These demands, summarized in an annex to this letter, will roll back public health safeguards and flexibilities enshrined in international law, and put in place far-reaching monopoly protections that will restrict generic competition and keep medicine prices unaffordable.

We believe this presents a direct threat to the future availability of affordable medicines for MSF’s patients and for millions of others around the Asia-Pacific region. We are also concerned that the TPP, billed as a ‘21st century model trade agreement’, could become a global standard, with worldwide damaging repercussions for access to treatment.

Negotiating countries should reject provisions that will harm access to medicines and ensure that the final text is aligned with relevant global public health commitments. Such commitments include the 2001 WTO Doha Declaration on TRIPS and Public Health and the 2008 WHO Global Strategy and Plan of Action on Public Health, Innovation, and Intellectual Property.

The medical research and development (R&D) system as it stands today does not deliver innovation for neglected populations and it results in unaffordable medicine prices for patients worldwide. Stricter IP rules reinforce, instead of reform, this broken system. There is a pressing need for a paradigm shift in the way pharmaceuticals are researched and developed, and how intellectual property is applied to medicines as global public goods. Governments should introduce global norms which delink drug development and price. MSF believes this is essential to closing the gap in access to medicines for millions of people around the world by promoting both innovation and access.

We thank you for your attention and are available for further discussions and information.