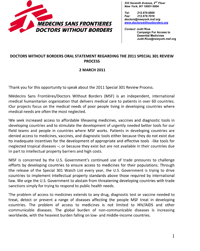 Médecins Sans Frontières/Doctors Without Borders (MSF) is an independent, international medical humanitarian organization that delivers medical care to patients in over 60 countries. Our projects focus on the medical needs of poor people living in developing countries where medical needs are often the most neglected.

We seek increased access to affordable lifesaving medicines, vaccines and diagnostic tools in developing countries and to stimulate the development of urgently needed better tools for our field teams and people in countries where MSF works. Patients in developing countries are denied access to medicines, vaccines, and diagnostic tools either because they do not exist due to inadequate incentives for the development of appropriate and effective tools  -like tools for neglected tropical diseases – or because they exist but are not available in their countries due in part to intellectual property barriers and high costs.

The problem of access to medicines extends to any drug, diagnostic test or vaccine needed to treat, detect or prevent a range of diseases affecting the people MSF treat in developing countries. The problem of access to medicines is not limited to HIV/AIDS and other communicable diseases. The global burden of non-communicable diseases is increasing worldwide, with the heaviest burden falling on low- and middle-income countries.

However the magnitude of the HIV/AIDS pandemic has highlighted the fact that millions in the developing world do not have access to medicines needed to treat the disease or alleviate suffering because they or their governments cannot afford them. It has also shown the benefits that generic competition can have on the cost of treatment.  Today, five million people are on antiretroviral therapy. This is only possible because generic competition caused annual first-line drug prices to reduce from over $10,000 to under $80 today. MSF could not provide treatment to 160,000 people in more than 30 countries without generic competition. The US government also acknowledges the significance of generic competition in its global AIDS contributions. PEPFAR has reported savings of up to 90 percent through the purchase of Indian generic medicines.

Alongside the tremendous progress in AIDS treatment remains tremendous need. Ten million more are in immediate need of treatment and increasingly patients will need to switch to newer drugs to ensure their long-term survival.  But the price difference is massive between the cheapest first-line medicines and the newest drugs because the newer products are more often patent-protected in countries with pharmaceutical manufacturing capacity. MSF data shows how this will impact the cost of treatment programs – the WHO-recommended second-line treatment is around 4.4 times more expensive than the most affordable first-line regimens, and expected third-line regimens are estimated to cost over $2,200 for one year’s treatment. Drug costs will increasingly limit patient treatment options, unless there are important price reductions of the kind seen through generic competition.

HIV/AIDS also serves as an example of the persistent and increasing barriers to access to medicines imposed by heightened IP measures. The USTR continues to undermine both PEPFAR and the Global Fund and treatment providers such as MSF by threatening trade repercussions against countries that use the flexibilities in international trade law that allow for generic competition to continue.

In our 2011 submission we have highlighted the importance of the following TRIPS flexibilities: the rights of developing countries to define patentability criteria; issue compulsory licenses; define data protection provisions; and define enforcement regimes. We provided the examples of Brazil, India and Thailand as developing countries that were included in the 2010 Special 301 report for using these flexibilities.

We are especially concerned with the reference included in the 2010 Special report on “temperature-stable forms of drugs or new means of drug delivery” in reference to India’s Section 3d. USTR is requesting the patentability in India of known industry practices that have benefits for use and adherence, such as heat stabilization and fixed- dose combinations, but that are not genuine innovation with therapeutic benefits. In our 2011 submission we have also highlighted the importance of the Brazilian Anuencia Previa that has given a role to the National Health Surveillance Agency (ANVISA) in the review of pharmaceutical patents applications to help determine whether patentability criteria are met. Public health implications and access costs demand that monopoly protection in developing countries be reserved for only truly innovative products.

Today, more than 3,000 people living with HIV/AIDs from all over Asia rallied in India alongside the United Nations Special Rapporteur for the Right to Health to protest TRIPS plus provisions in a trade agreement between India and the European Commission. If some of the provisions in the agreement go forward, India’s capacity to remain “the pharmacy of the developing world,” the place poor people rely on for their lifesaving medicines, will be endangered. With this testimony we join in solidarity with protestors in India and urge the US government not to ignore their voices by pushing for similar standards.

The United States demands not only directly undermine the commitments made by the U.S. government under the WTO Doha Declaration on the TRIPS agreement and public health and the WHO Global Strategy and Plan of Action on Public Health, Innovation and Intellectual Property, they create a fundamental contradiction between U.S. trade policy and the U.S. government commitments and priorities on global health and development.

We urge USTR to align itself with better access to medicines policies pursued by the U.S. government. For example, during the January 2011 128th Executive Board of the World Health Organization the U.S. government made a very strong statement in support of generic competition to lower the price of HIV/AIDS treatment in developing countries. Recognizing that pharmaceutical price discounts do not always have as much impact on bringing down prices as robust generic competition, it urged companies to join the recently created Medicines Patent Pool in order to increase generic competition for newer HIV/AIDS drugs.

There are better and newer ways for the U.S. government to protect and promote innovation currently being piloted and under discussion at the WHO and other forums. Ways that would combine innovation and access, by de-linking the cost of R&D from the price of products.