MSF Responds to Flood Victims in Burkina Faso and Niger 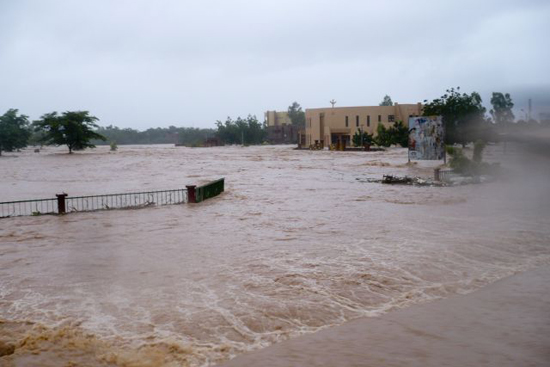 Massive flooding in West Africa has displaced hundreds of thousands of people, most recently in Burkina Faso and Niger.

Since June, flooding in 16 West African countries has left more than 159 people dead and around 600,000 displaced according to United Nations estimates. Following a recent violent rainstorm in Burkina Faso and Niger, Doctors Without Borders/Médecins Sans Frontières (MSF) has reinforced its teams to provide assistance to the growing number of displaced people.

About 10 inches of rain, roughly a quarter of the average annual rainfall, fell on Ouagadougou, Burkina Faso's capital, over 12 hours on September 1. The downpour created floods that destroyed more than 24,000 homes and displaced about 150,000 people—one in 10 of the country’s inhabitants.

On the same day, in Agadez, Niger, 3,500 houses were destroyed and 28,000 people were affected by flooding. MSF teams in Burkina Faso and in Niger immediately took action to assess the needs and to ensure that  victims had access to medical care and hospitals were operational.

“These have been particularly massive floods. Nobody can recall such large floods in recent decades, but there is no chaos," said Mohamed Morchid, MSF head of mission in Burkina Faso.  "Many displaced are being sheltered by relatives, tens of thousands are in schools and health centers. They are given food and basic supplies. The ministry of health is providing free consultations at clinics set up at some of the gathering sites. But not all sites are covered and there is a lack of medicine. The added value MSF has in this context is mainly its capacity to respond quickly to selective medical needs while large-scale measures are being set up.”

“We’re seeing patients with infected wounds—injuries they received when they tried to save their belongings as the water rose," Morchid said. “Many people are also suffering from diarrhea, certainly linked to the worsening sanitary conditions since the floods. Then there are also the usual diseases—malaria and respiratory and skin infections. We treat them on-site because they can’t go to their usual health centers.”

MSF teams are also distributing soap to the flood victims and evaluating access to drinkable water, and hygiene conditions. At some of the gathering sites, latrines and temporary showers are being constructed.

The capital’s main hospital, Yalgado, was damaged and some departments are no longer functioning. MSF has set up two 12-bed tents to increase patient capacity in the emergency pediatrics department in Bogodogo’s district hospital. Teams are donating medicines to local clinics at sites where flood victims have gathered.

In Agadez, MSF activities include a mobile clinic, distribution of basic hygiene supplies to 2,000 families, and the construction of latrines in schools that are providing temporary shelter for the flood victims.