MSF Responds to Floods in Nigeria 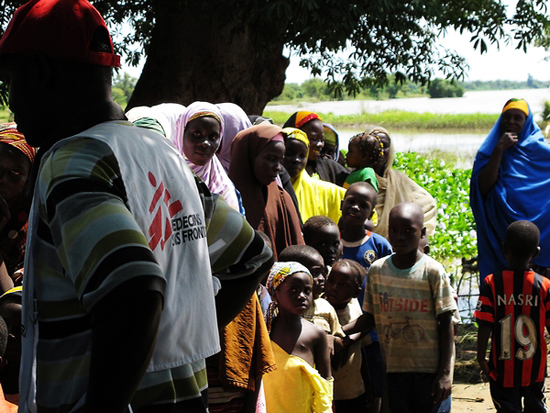 Hundreds of villages were destroyed and thousands of people were affected by the floods, which occurred after heavy rainfall caused the Benue River to rise above its banks. The situation was further complicated by additional water that was released from a dam in neighboring Cameroon. In some places, houses were totally submerged, their residents forced to flee. As of last week, however, the water had receded and displaced people were starting to return to their homes.

MSF’s intervention began in early September, when medical and logistics teams were deployed in Adamawa and Taraba states. MSF used motorboats to reach isolated and displaced populations in remote flooded areas that were cut off from medical assistance.

Among the affected population, MSF staff found high rates of malaria, particularly in the Mayorenewo area, where more than 80 percent of patients tested positive. Malaria is transmitted by infected mosquitoes and can be fatal if it is not treated. In an effort to reduce the number of mosquitoes and avoid a spike in malaria cases, MSF teams exercised vector control by spraying breeding grounds and distributed mosquito nets to internally displaced families.

“Malaria is already endemic in the region but, due to the flow of people to this area, local health centers were unable to cope with the increased amount of cases,” said Terri Morris, MSF head of mission in Nigeria. “Also, in remote villages and settlements there were almost no functioning health services. Patches of standing water from the floods were a perfect breeding ground for mosquito larvae, and the situation was worsened by the overcrowding caused by the displacements. In some cases 150 people were sharing a house designed for a family of 20, all without mosquito nets.”

In Taraba state, where a population living along 150 kilometers [90 miles] of the river was significantly impacted by the floods, MSF mobile clinics carried out 1,430 consultations in Mayorenewo and 10 nearby villages and locations where displaced people had settled, including Bandawa Virna, Zip, and Didango. The teams provided primary and emergency health care, focusing on children under five and pregnant women. Some cases of skin diseases and diarrhea were also detected.

“What was remarkable for the teams was the capacity and spirit of the displaced and host community to cope with the situation and begin their recovery from what was the worst flooding in 30 years, with very little external support,” says Morris.

MSF first intervened in Nigeria in 1985 and has been continuously working in the country since 1996.