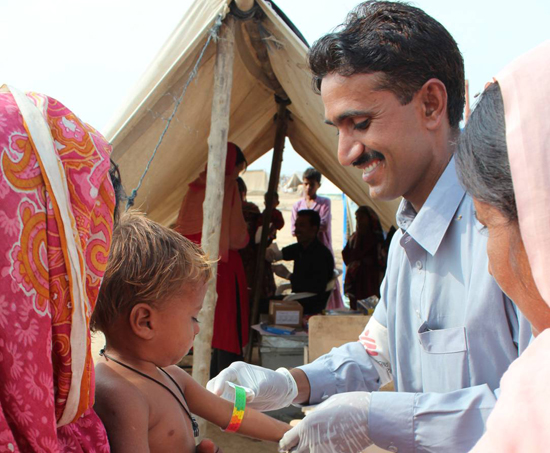 A child is measured with a middle upper arm circumference band by MSF health staff in order to check for malnutrition at a mobile health clinic and ambulatory therapeutic feeding clinic in Dera Murad Jamali.

In early September, the Doctors Without Borders/Médecins Sans Frontières (MSF) team working in the eastern reaches of Pakistan’s Balochistan province expanded their existing services to include basic health care for people affected by heavy monsoon rains lashing the area.

The needs become apparent as heavy monsoon rains flooded the town of Dera Murad Jumali and surrounding areas, forcing thousands of families to abandon their homes and seek shelter on the sides of roads in makeshift tents. In response, MSF’s team in Dera Murad Jamali is now supplying water to 20 water tanks and two 15 cubic meter water bladders to ensure that there is safe drinking water for thousands of people who otherwise cannot access it. MSF is providing more than 650,000 liters of clean drinking water to the displaced people every day.

In addition, teams set up a temporary 10-bed Diarrhea Treatment Center (DTC) in Dera Murad Jamali’s Civil Hospital to treat patients diagnosed with acute watery diarrhea. Two mobile medical clinics are providing basic health care to people in Nasirabad and Jafarabad, treating an average of 150 patients daily, and more than 1,000 children under the age of five have been enrolled in MSF’s ambulatory nutrition program.

“MSF’s priority was to provide access to clean drinking water and improve hygiene standards as a preventive measure against respiratory tract infections and water borne diseases,” says MSF’s Dr. Mushtaq Ahmed. “We are focusing our efforts on reaching the most vulnerable populations by providing potable water and diarrhoea treatment and nutrition support to the local populations.”

In response to an outbreak of Acute Watery Diarrhoea, MSF distributed over 800 jerry cans, soap, and aqua tabs to people living in the affected area. An additional 28 health promoters are reaching out to communities in around Dera Murad Jamali to provide health education and improve hygiene conditions.

Although water levels have started to recede in some places, sanitation and medical needs remain high. More 200 latrines have been constructed in four locations and another 220 are planned. Furthermore, on October 20, MSF distributed approximately 4,000 relief kits to the flood affected people of Sobhat Pur Tehsil in Dera Allah Yar; each kit contained a hygiene kit, two mosquito nets, and a jerry can.

In Jacobabad, where flood water has forced people to flee their homes and seek safety and shelter on dry ground, MSF teams carried out a needs assessment that showed people are in urgent need of shelter, non-food items, as well as primary health care and sanitation.

This week MSF distributed more than 4,000 relief kits in Jacobabad’s Nawa and Mubarak districts, where many vulnerable people have gathered. The kits contained essential items such as soaps, jerry cans, mosquito nets, and other hygiene items. MSF is working on providing safe drinking water and improving sanitation in the area, as well as providing basic health care through mobile medical clinics.

This is not MSF’s first response of its kind in the area. In July 2010, MSF responded to flooding across 15 locations in Pakistan. In September 2011, MSF once again provided emergency medical care and relief to the highly affected populations in Sindh, particularly in Badin.

Since 1986, MSF has been working in Pakistan with Pakistani communities and Afghan refugees who are victims of armed conflict and natural disasters or who lack access to medical care. MSF teams are currently providing free emergency medical care in Kurram Agency in the Federally Administered Tribal Areas and in Khyber Pakhtunkhwa, Balochistan, and Sindh provinces.

MSF relies solely on private financial contributions from individuals around the world for its work in Pakistan and does not accept funding from any government, donor agency or military or politically-affiliated group.