Situation is rapidly deteriorating in the capital city 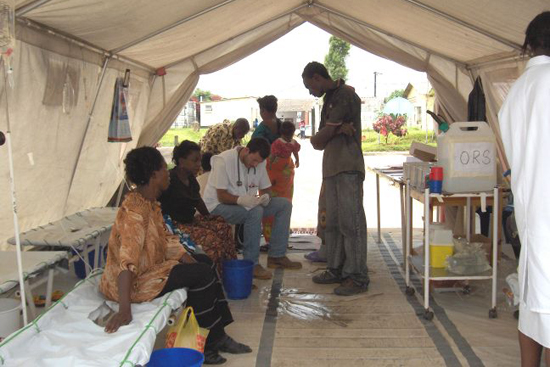 An MSF staff member performs patient consultations at a CTC in Lusaka.

The cholera outbreak in Zambia that began on October 3, 2008, deteriorated dramatically in the month of January. Some 1,169 cases had been reported by January 21 in the capital, Lusaka.

In the one-week period from January 12 to 18, there were a reported 301 new cases of cholera and 36 deaths, which posed a real challenge to the local health authorities and facilities.

Doctors Without Borders/Médecins Sans Frontières (MSF) responded by setting up a cholera treatment center (CTC) with a 150-bed capacity in Lusaka, the area most affected by the epidemic. On January 16, five additional MSF emergency staff arrived to reinforce the teams working in Lusaka. More personnel, medical and non-medical, and supplies were expected to arrive over the next few days.

Currently, the team is directly involved in the treatment of patients, as well as improving the treatment center’s facilities, and in water supply and sanitation activities.

“Our immediate priority was to improve case management in the CTC, and this is already happening with the arrival of additional staff,” said Jon Irwin, head of the MSF mission in Zambia. “The outbreak is spreading in areas characterized by severe overcrowding and almost nonexistent water and sanitation facilities to the south of the city. Our next step will be to assess conditions there. The lack of an available site for a CTC in that area means that patients have to be transported in discomfort and at some risk to receive treatment.”

Cholera cases have also been reported in other parts of Zambia. MSF has been following up on the different outbreaks in the country and conducted an exploratory mission in Chirundu, in Southern Province, bordering Zimbabwe. At this point, MSF has decided not to intervene in this area, as the Ministry of Health has set up a CTC close to the border with Zimbabwe where cases are referred. The organization is closely monitoring the situation and is ready to provide support if needed.

In Northern Province and Luapula Province, where there have been a total of 595 and 463 cases, respectively, there have been no reported cases since November, so the outbreak is considered to have been contained in these areas.

Cholera is not uncommon in Zambia – its cycle coincides with the rainy season every year and is directly related to the lack of access to proper water and sanitation facilities. MSF will continue to respond to the new cases of cholera in the country and support the local health facilities with medical teams and supplies.