MSF Survey: Gunfire is Main Cause of Death of People Fleeing Darfur

A mortality survey released by MSF shows that the majority of people who died fleeing Darfur earlier this year perished as a result of violence. 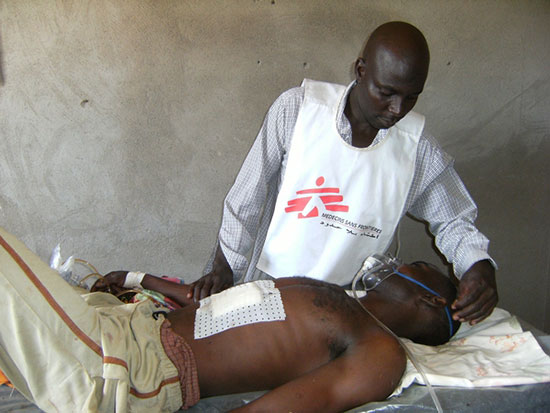 An MSF nurse stabilizes a patient at the hospital in Tissi town.

PARIS/NEW YORK, AUGUST 6, 2013—The majority of people who died while fleeing central Darfur, Sudan, earlier in the year perished as a result of violence, and mostly by gunfire, according to a retrospective mortality survey released today by the international medical humanitarian organization Doctors Without Borders/Médecins Sans Frontières (MSF).

Between January and May 2013, tens of thousands of Darfuri refugees and Chadians fled Darfur and sought refuge in the Tissi area of neighboring Chad. The survey, carried out by MSF's epidemiological research division, Epicentre, reveals that 119 of the 194 deaths (61 percent) reported by family members were caused by violence. One hundred and eleven people, or 93 percent, died from gunshot wounds linked to specific episodes of violence preceding the two major waves of displacement, one in early February and one in early April. The people shot to death died in Darfur. Survivors reported mass shootings and the burning and looting of villages.

“This survey confirms that violence in Darfur is indeed the major cause of mortality,” said Delphine Chedorge, MSF emergency coordinator.

In an effort to understand whether people died from violence in Darfur or a lack of aid once reaching Chad, Epicentre gathered information in the Haraza and Tissi settlements in Chad in mid-May. More than 15,000 people across 2,658 households were surveyed. The survey was evenly divided between Darfurian refugees and Chadians who had returned to their country.

The majority of refugees interviewed by MSF in Tissi came from Abugaradil, a village in Darfur. They reported 71 violent deaths when the village was attacked between April 2–9.

“I was in Abugaradil when I saw vehicles entering,” said Sadam*, a 33-year-old refugee who arrived in Tissi in April. “I was hit by a stray bullet that entered my right arm. Many villagers were killed. My brothers put me in a cart and carried me for one and a half hours to reach the hospital in Tissi.”

In the past week, MSF teams in Tissi have treated 30 people injured in Darfur, 13 of whom suffered gunshot wounds and were evacuated to the nearby town of Abeche for emergency surgery. It is the largest wave of wounded MSF has seen in the last two months.

MSF first received reports of displacements in early March while conducting a yellow fever vaccination campaign in Chad’s Goz Beida district. A few weeks later, MSF began providing emergency medical care, shelter materials, clean water, and hygiene items to the refugees and returnees in the Tissi area. From June to September, rains isolate most of Tissi and aid operations will have to be scaled down. An MSF team has nevertheless remained in Tissi town and continues to receive and treat patients.

*Name has been changed

MSF has worked in Chad for more than 30 years, and also runs regular projects in Abeche, Massakory, Am Timan, and Moïssala.