An MSF team has returned to Muhajariya in South Darfur where an estimated 35,000 people have been affected by heavy fighting. The team had been forced to leave for four weeks. 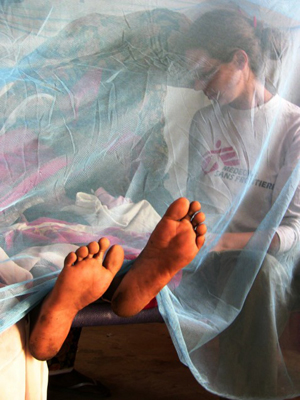 An MSF nurse helps a woman breastfeed her severly malnourished child in the therapeutic feeding program in Muhajariya, South Darfur, in September 2008.

A Doctors Without Borders/Médecins Sans Frontières (MSF) team has returned to Muhajariya in South Darfur where an estimated 35,000 people have been affected by heavy fighting. The team had been forced to leave for four weeks.

In mid-January, clashes between two rival rebel groups compelled MSF to evacuate most of its medical team to Nyala, the regional capital, about 80 km (50 miles) away. During the first days of fighting the MSF base was completely destroyed by fire. The MSF clinic was untouched and has remained functional. MSF holds the respective rebel groups responsible for damage to its goods and premises during the time they were in control of the town.

Following the evacuation, a small team of Sudanese MSF staff remained in Muhajariya and continued to provide basic services. MSF has begun re-establishing full medical services, and within two days the number of outpatients had already doubled. MSF plans to bring in more staff and to restore clinics in the nearby areas of Labado and Um Shegeira.

“On arrival, the newly installed government of Sudan authorities in town welcomed the restart of our medical activities. We aim to soon have our services back to the same level as before we were forced to evacuate,” said MSF country director in Sudan, Reshma Adatia, currently in Muhajariya.

In MSF’s absence, people living in Muhajariya and its immediate surroundings have been directly affected by the violence. They were left without sufficient and urgently needed medical assistance and nutritional support.

“It looks like more than half of the town has emptied. We do not exactly know where the people are, but we will try to follow up and assist where needed. It seems people fled rapidly into the harsh environment, with little or no time to assemble and carry provisions. We fear they urgently need assistance,” said Adatia

In the camps around Al-Fasher, in North Darfur, MSF is supporting other organizations providing medical assistance to approximately 5,300 newly displaced people. Teams distributed initial kits with basic non-food items to approximately 1,000 people who had to leave behind all their belongings. As people continue to arrive in the region, MSF plans to continue distributions and to increase the provision of medical care.

Since July 2004, MSF has provided medical assistance in and around Muhajariya. In 2008, MSF provided more than 54,000 consultations through inpatient and outpatient services. Some 6,500 women were treated through maternity services and 300 babies have been delivered. The MSF nutrition program has treated over 1,000 children. In addition, MSF gives mobile clinic support to the nearby areas of Labado and Um Shegeira. Around Al Fasher, North Darfur, MSF provides medical care to about 33,000 displaced people in the Shangil and Shadat camps and to surrounding villages.