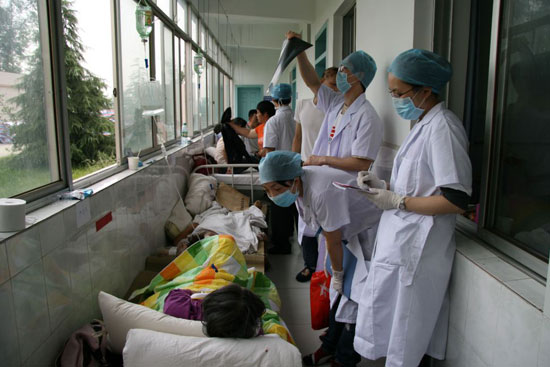 Two MSF doctors do a medical check-up for an earthquake victim in a hospital in in Guanghan town in Deyang, Sichuan, China. An MSF team, including an orthopedic surgeon and a physician, is supporting the hospital.

A week after a 7.9 magnitude earthquake killed a reported 32,000 and left up to 4.8 million people homeless in China’s southwestern Sichuan province, Doctors Without Borders/Médecins Sans Frontières (MSF) has now provided more than 210 tons of relief supplies as well as medical assistance to the survivors.

Reinforced by an enormous outpouring of material and financial support by private citizens and local communities throughout China, as well as offers of additional aid from abroad, the Chinese government’s response to the disaster has so far been swift and massive. MSF teams have been working with the Chinese Red Cross and other local health authorities to assess additional needs in the affected area, which is extremely populated and covers an area nearly as large as France.

MSF teams carried out assessments throughout the weekend as roads have been further cleared and it is gradually possible to reach areas closer to the earthquake’s epicenter. Basic necessities such as food, water, and shelter are largely being met, although there is still a need for specialized medical care and equipment as hospitals in the region have been severely damaged and many are unusable. With the distribution and logistical support of the Chengdu Red Cross, MSF has now donated 1,750 family tents to the relief effort, with an additional 2,000 planned for delivery this week. 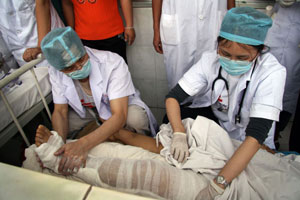 MSF doctors examine a patient in a hospital in Guaghan town, Sichuan, China.

An MSF team, including an orthopedic surgeon and a medical doctor, is supporting a triage referral center in Guanghan city in the hard-hit prefecture of Deyang. The hospital is treating severely injured patients airlifted from the cities of Shifeng, Mianzhu, and Beichuan which were all heavily damaged by the earthquake. In addition, MSF has donated medicines and medical supplies to this hospital.

MSF also visited several locations in Guanghan where people left homeless from the earthquake have settled temporarily. Basic necessities have largely been met by the government and the local population.

MSF also visited and supplied medical materials and tents to two state-run hospitals in Hanwang, Mianzhu city, approximately 60 kilometers east of the epicenter. Both hospitals suffered severe structural damage in the earthquake and all medical activities are now being carried out in open-air tents near the hospital grounds. The hospital staff – the majority of whom have been directly affected by the quake themselves – are exhausted. Over the weekend, MSF donated 20 large-size tents for patients and clinics to each of the two hospitals and is exploring the possibility of additional support.

A team of two nephrologists from the University of Ghent in Belgium and one from Hong Kong who are specialists in “crush syndrome” and working in collaboration with MSF have been providing expertise on treating the condition in three of the largest hospitals with orthopedic and trauma capacities in the provincial capital of Chengdu, where many of the quake victims have been transported. They have also shared experience on the diagnosis and treatment of the condition in a hospital in Guanghan. Crush syndrome is a condition in which muscle tissue damaged by severe internal injury may release massive quantities of toxins into the bloodstream and lead to kidney failure. Left untreated, crush syndrome can be fatal.

This week, MSF teams will continue to assess the needs in the affected region and provide assistance where appropriate. Currently, MSF has 23 staff in the quake-affected regions.

MSF has worked in China since 1988. At the time of the earthquake, MSF staff members were working in Nanning, Guangxi Zhuang Autonomous Region, where the organization has been running an HIV/AIDS treatment program since 2003 in collaboration with the Guangxi Public Health Bureau and the Nanning CDC. Early 2008, MSF handed over another HIV/AIDS program in Xiangfan, Hubei Province, to the Chinese authorities.