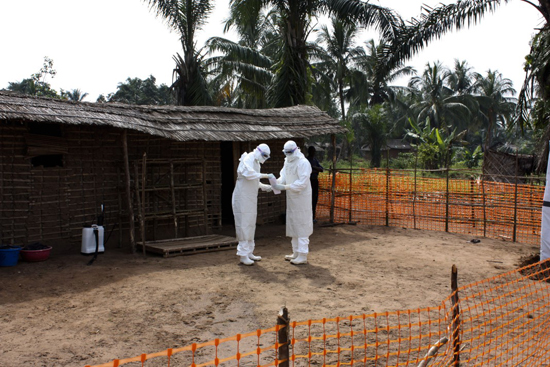 MSF medical staff in protective gear work outside an isolation unit for people suspected of having Ebola, near Kaluamba, Western Kasai province.

Doctors Without Borders/Médecins Sans Frontières (MSF) staff sent more than 20 blood and stool samples to laboratories in the Congolese capital Kinshasa and also to South Africa and Gabon. To date, just ten results have returned, four of which are positive. However, none of the samples from the 13 deceased have returned positive results for Ebola at this point. A reliable laboratory that is both closer and able to provide results within 24 hours would help differentiate Ebola patients from those suffering from other diseases.

The MSF team on the ground is concentrating on four main strategies to deal with the outbreak. First, they isolate and provide medical and psychological care to patients in an isolation center in Kampungu village, close to Kaluamba. Currently one patient is still receiving care in the isolation center and is recovering.

Second, the teams track people who have had any potential contact with the disease; currently staff are monitoring 200 such people every day.

Third, MSF educates the population about the disease and how to avoid transmission.

Finally, the team also provides free health care in the affected area and will continue to do so for as long as the outbreak continues. By doing this, MSF hopes to lower the financial barriers that stop people in the area from accessing healthcare. They also hope it will help address people’s suspicions that health centers are where Ebola is contracted.

Ebola is a highly contagious and deadly viral disease. It is transmitted between people through contact with body fluids (blood, vomit, or diarrhea). Thus, because of their proximity to the patients, both health staff and family members are at serious risk of contracting the disease. MSF also makes sure burial practices are carried out with the necessary protection measures.