In Yemen, MSF teams have treated over 50 people in the last week amidst increased violence in the south of the country. 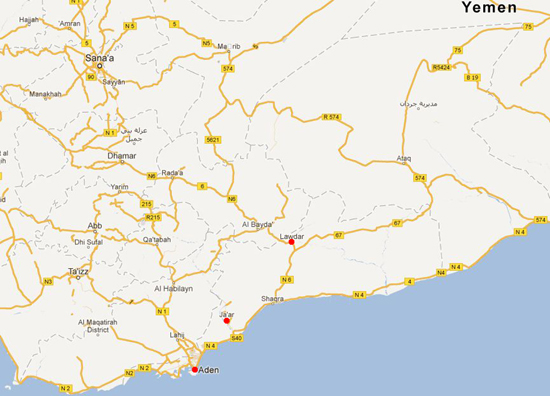 The cities of Jaar, Lawdar, and Aden in southern Yemen, where health facilities are receiving increasing numbers of patients injured in conflict.

SANA’A/NEW YORK, MAY 21, 2012—Teams from the international medical humanitarian organization Doctors Without Borders/Médecins Sans Frontières (MSF) have treated over 50 people over the last week amidst increased violence and fighting in southern Yemen.

Since May 12, MSF teams have received increasing numbers of patients admitted to health facilities in Jaar, Lawdar, and Aden, following a new wave of violence and fighting around Zinjibar, capital of Abyan Governorate, and Lawdar, 100 miles northeast of Zinjibar. Eight severely injured people were transferred to Aden from an emergency health post in Jaar, while 43 people were treated at Lawdar Hospital. All patients are civilians suffering from bomb-blast injuries. MSF staff at Lawdar have been unable to refer patients to other health facilities as road blockages have made travel impossible.

MSF is extremely concerned about the fate of civilians caught in the current fighting and calls on all parties to protect the civilian population and allow access to health facilities.

At an emergency health post set up in a post office in Jaar, MSF and staff from the Ministry of Health have been providing basic emergency care to the injured. Teams have continued working over the past few days despite extremely challenging conditions, which have made it impossible to obtain essential medical supplies, to transfer emergency patients to the hospital, or to communicate with teams in Aden.

During 15 days of heavy clashes in April, more than 200 heavily injured people were received in the emergency room of Lawdar Hospital, where MSF has been working since January 2012. Since January, more than 3,000 patients have been treated at the health post in Jaar and more than 1,500 at Lawdar’s emergency room. MSF staff have also referred more than 200 patients with serious injuries to Aden. More than one-third of these were trauma cases related to violence, and the vast majority were civilians.

MSF has been working in Yemen since 1994 and continuously since 2007. Today, the organization conducts medical and surgical activities in the governorates of Amran and Hajjah in the north of the country, as well as in Aden, Lajh, Abyan and Al Dahle, in the South. MSF does not accept any government funding and relies solely on private donations to fund its activities in Yemen.