MSF Treats High Numbers of Victims of Violence in Morocco

In the last month MSF teams have treated high numbers of sub-Saharan African migrants who fell victim to violence in Morocco's Oriental region. 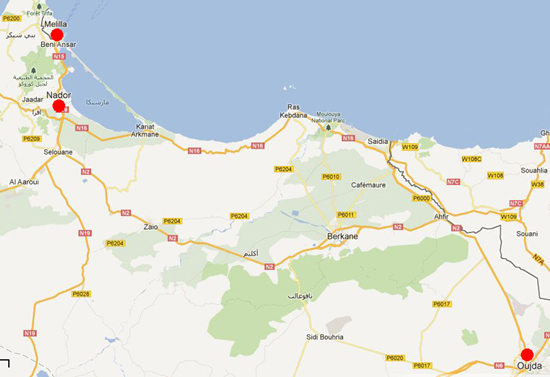 Morocco's Oriental region. The city of Nador can be seen at top left, along with the Spanish enclave of Melilla.

In the last month Doctors Without Borders/Médecins Sans Frontières (MSF) teams have treated high numbers of victims of violence in Morocco's Oriental region. Bordering the Spanish enclave of Melilla, this region is part of the long journey for many hundreds of migrants from sub-Saharan Africa en route to Europe. MSF has worked with this vulnerable population since 2003 and focuses on increasing access to health care, improving living conditions, and ensuring dignity.

Every summer, as weather conditions improve, more and more migrants attempt to make the dangerous journey by sea to mainland Spain or climb the fences surrounding Melilla. In the last month, however, MSF teams have noticed high numbers of people seeking medical help for injuries resulting from violence.

“During our last mobile clinic in Nador in June, 22 percent of the 200 consultations carried out by the MSF team were for injuries related to violence,” explains MSF Head of Mission David Cantero. “Many of the people we have treated tell us that their injuries are a result of being beaten by security forces during attempts to cross into Spain. MSF teams have also treated a number of people who were injured when fleeing arrest during ongoing, daily raids in the region.”

Since then, MSF teams have received 12 emergency calls from migrants living in Nador and referred 34 people to Al Hassani hospital. From June 25 to July 16, MSF staff in Oujda assisted 165 victims of violence, including 81 people injured in mass arrests in Jador on July 11.

MSF has worked in Morocco since 1997. Since 2003 the organization has worked with sub-Saharan migrants, a vulnerable population with specific medical and humanitarian needs related to their living conditions and irregular administrative situation. MSF currently has two projects in Morocco. In Rabat, the country’s capital city, MSF teams provide medical and psychological care to migrant victims of sexual violence. In Oriental region, which borders Algeria and Melilla, MSF works to ensure migrants have access to medical care in public health facilities in the city of Oujda. MSF teams also provide psychological care; distribute basic shelter materials, hygiene, and cooking kits; and carry out water and sanitation activities. In the same region, MSF teams provide primary health care and psychological support during monthly mobile clinics in Nador.