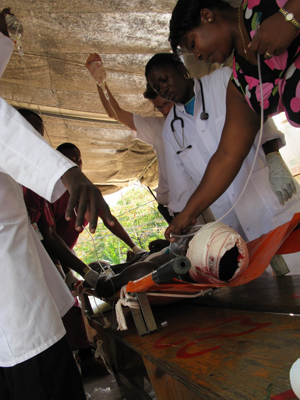 Since April 7, 2008, Doctors Without Borders/Médecins Sans Frontières (MSF) teams have treated more than 31 wounded patients, including 15 people with gunshot wounds, in MSF-operated hospitals in the Haitian capital city, Port-au-Prince. Most of the patients were wounded when demonstrators in the city protested against rapidly increasing living costs, especially sharp increases in the price of basic food items.

Treatment of Wounded Patients in Port-au-Prince

“On April 8, we treated 25 wounded patients at Trinité hospital, including 14 gunshot victims,” said MSF project coordinator Guenaele Rota. “Of the 25 people, two had knife wounds, nine were beaten, and one person had non-accidental burns. Six of the wounded were transferred immediately to the operating room for surgery.”  The same day, 20 patients were treated following traffic accidents. Although the country experienced fragile stability in 2007, few medical facilities in Port-au-Prince can provide treatment to wounded patients on an emergency basis.

Starting Monday, April 7, our medical teams provided emergency care to 10 patients with gunshot wounds over a 48-hour period in Martissant, a slum in southern Port-au-Prince. Four of the wounded patients were transferred as emergency cases to MSF’s Trinité hospital. There were also many people with wounds consistent with beatings from bottles and rocks.

“On Monday, we set up an ambulance system so that we could transfer wounded patients from the center of the city, specifically from the Champs du Mars,” said Jessica Neerkorn, MSF’s head of mission in Haiti. “However, given current conditions, access remains limited both for our MSF teams and for the wounded. It is very difficult for them to reach medical facilities.”

The number of patients able to receive outpatient care has fallen sharply. Given the blockage in the city, MSF has set up a transportation system for some of its medical staff, but MSF mobile clinics were suspended on April 9.

The lack of staff and resources creates serious problems for the public medical facilities in Port-au-Prince, which have found it difficult to function over the last few days. The Jude Anne maternity hospital, where MSF continues to provide obstetrical care, is now one of the only functioning maternity wards in the city. Jude Anne has recently admitted many women with complicated pregnancies. Similarly, at the request of local health authorities, MSF evacuated patients, including pregnant women, from the Choscal hospital in Cité Soleil due to the inability of Haitian medical staff to access the facility.

MSF has been working in Haiti since 1991. MSF currently operates four health centers in Port-au-Prince. MSF provides emergency trauma care at Trinité hospital, at Delmas 19, where it has treated more than 8,000 victims of violence since 2004. In the Pacot district, MSF provides post-surgical physical therapy in a 48-bed health center and also treats victims of sexual violence. At the 60-bed Jude Anne hospital, which opened in March 2006, MSF has provided labor and delivery care to more than 18,000 women. In Martissant, MSF manages a health center and operates mobile clinics in one of the city’s poorest neighborhoods. Since December 2006, more than 200 patients with gunshot wounds have been treated in MSF’s Martissant health center.