Across North Africa and the Middle East, MSF has been supplying and assisting hospitals and health structures where medical staff face increased numbers of injured people. 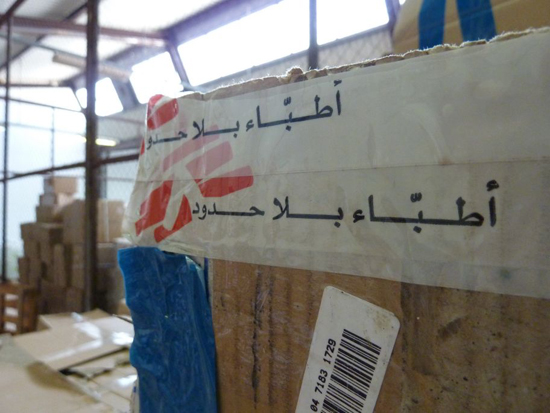 Supplies sent by MSF into Libya before teams were forced to pull out due to insecurity in the east.

Ever since protest, civil unrest, and violence erupted in countries across North Africa and the Middle East, teams from Doctors Without Borders/Médecins Sans Frontières (MSF) have been supplying and assisting hospitals and health structures where medical staff are facing increased numbers of injured people. Teams are also assisting people who are fleeing to neighboring countries.

What follows is an overview of MSF’s work in the Middle East and North Africa at present:

Although MSF continues to work tirelessly to re-enter Libya to tend to medical needs in the areas where there is conflict, the teams are currently unable to work on Libyan soil. Last week the teams in Benghazi were forced to leave as fighting moved east and travel in eastern Libya became increasingly insecure. Nine MSF staff members are now in the Egyptian city of Alexandria and are facilitating the delivery of emergency medical supplies—including dressing materials, medical kits for treating the wounded, and surgical supplies—across the border. They also deliver drugs, including for chronic diseases such as diabetes, hypertension, and cardiopathy that have been identified by Libyan doctors as medical needs. MSF has donated more than 33 tons of supplies to date.

An MSF nurse worked one night in the hospital in Ajdabya and assisted in the treatment of ten wounded people and the birth of twins. But due to the security situation, it is not currently possible to have MSF staff present in health facilities in Libya. It is likewise not possible for MSF to carry out assessments in the country, making it very difficult to get a clear picture of the needs.

MSF is also trying to enter Libya from Tunisia. But in spite of continuous efforts over the past month, the teams have still not received authorization to cross the border. In the meantime, MSF has been supplying health facilities in the areas affected by conflict with medical kits and drugs. On March 21, a shipment of two surgical kits with enough materials to care for 150 wounded people arrived at the hospital in the Libyan city of Misrata.

In Tunisia, at the border with Libya, a 25-person MSF team is providing care to people who have fled the conflict. They have set up tents at the entry point at Ras Ajdir and at the Choucha transit camp, located seven kilometers [just over four miles] inland and housing 6,000 people awaiting resettlement or repatriation. The MSF teams in Choucha are providing mental health support to people who have been subjected to or witnessed varying degrees and forms of violence and who now face an uncertain future. Similar support is being given to people in Dehiba, 150 kilometers [90 miles] from Ras Ajdir. To date, MSF psychologists in all three locations have carried out individual consultations and group sessions for 4,062 people. A total of 501 refugees and migrants have had individual consultations at one of the MSF tents in Choucha, while the psychologists there have organized 323 group sessions.

People are fleeing from Libya to Niger, too. Between March 11 and March 15, 1,309 people arrived in Dirkou, in Niger. MSF provides medical assistance when they arrive in the Nigerien city of Agadez.

On the Italian island of Lampedusa, a four-person MSF team—a doctor, nurse, logistician, and cultural mediator—are assessing the health needs of migrants and providing medical care in collaboration with local authorities. In recent weeks, around 5,400 migrants arrived in Lampedusa, the majority from Tunisia. While most are in good health, living conditions are poor; people arrive in structures that are overcrowded and lack adequate sanitation. The MSF team will distribute relief items to the migrants by the end of this week.

Activities In Other Middle Eastern Countries Where Tension Is High

MSF has been closely following the evolution of the situation in Yemen since widespread demonstrations began in January. In Sana'a, Aden, and Ta'ezz, MSF teams are in contact with both Yemeni authorities and medical committees set up by demonstrators. In recent weeks, MSF has donated medical materials and performed training to medical staff in health care structures in all three locations. As for now, Ministry of Health-run hospitals and field hospitals set up by demonstrators’ committees have been able to cope with increased needs and influx of wounded people. MSF teams are ready to scale up relief activities based on an evaluation of needs.

MSF’s medical activities in different areas of the country continue. In the north, MSF has been providing medical and surgical care to the resident and displaced population in the Saada governorate and in the neighboring governorates of Hajjah and Amran. In the south, MSF supports the public hospital of Radfan district to cope with the needs of the population affected by unrest in Lahj governorate. MSF has also started a partnership with Yemeni health authorities to improve the treatment and reduce the stigmatization of HIV/AIDS in the capital city of Sana’a.

In Bahrain, MSF is in contact with a number of medical facilities and ready to assist if needed. Earlier this year, an MSF assessment team made contact with medical organizations in the country. The team visited Salmanya Hospital, in the capital city of Manama, several times and offered support.

MSF is also following the situation in Syria where unrest has gripped the city of Daraa for the past week. Since 2009, MSF has been working in Damascus with a local organization to provide free health care and mental health support to unregistered Iraqi refugees, migrants, and vulnerable residents of the city.

In Algeria, an MSF exploratory team made contact with the Ministry of Health and with non-governmental organizations in early March. The purpose was to assess possibilities of cooperation in case violence erupted. Thus far, no MSF intervention has been needed.

Over the past few months, MSF gave support to resident medical structures in Tunisia and Egypt during the uprisings in those countries. This past January, MSF donated medical equipment, including orthopedic materials to hospitals in the Tunisian towns of Kasserine and Sidi Bouzid, where health staff had seen their stocks depleted during the demonstrations and were lacking medical supplies to cover the needs.

During the protests in Tahrir Square in the Egyptian capital, Cairo, MSF supplied medical materials to Egyptian doctors in two hospitals and in an improvised clinic in a mosque. The team also provided training on how to manage high numbers of injured people who arrived in a short period of time and helped set up additional emergency preparedness systems.