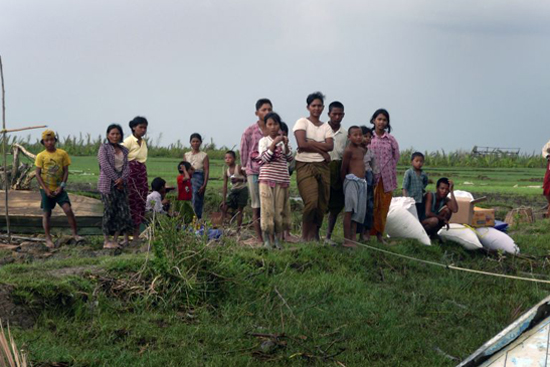 Doctors Without Borders/Médecins Sans Frontières (MSF) now has full access to people in the Irrawaddy Delta region, and over the past weeks has significantly increased emergency activities and medical coverage to reach survivors who had still not received adequate levels of aid. Currently, MSF teams are running mobile and fixed clinics, working to reach up to 350,000 additional people.

While the headlines have disappeared, the suffering of those who survived has not. Thousands of people in the worst-affected delta area continue to struggle with day-to-day survival, and there is a significant shortage of aid and assistance in many areas. As the people of Myanmar attempt to rebuild their lives and communities, MSF can see that the urgent need for basic aid—food, water, shelter, and medical supplies—will continue.

Medical issues in the Delta 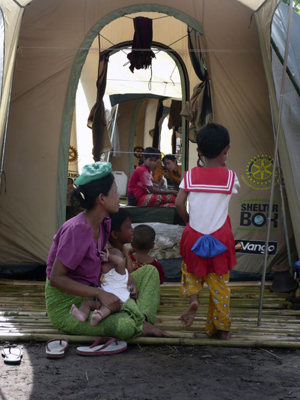 Survivors of the cyclone take shelter inside a tent.

Since the start of its emergency response two months ago, MSF has reached more than 460,000 people through its emergency aid program, delivered 939 tons of medical and relief supplies, and carried out more than 30,000 medical consultations.

Medical teams are currently treating people for diarrhea, respiratory tract infections, malaria, dengue fever, and malnutrition. Despite an increase in patients being treated for dengue fever, respiratory infections, and malaria, there have been no reports of disease outbreaks or epidemics, and pathologies remain relatively stable. However, future outbreaks of disease among the survivors are a concern, particularly as the heavy rains continue.People lack adequate access to food, shelter, and clean water, which increases their vulnerability to disease.

Cases of diarrhea represent more than one tenth of MSF medical consultations, and are caused by a combination of poor sanitary conditions, contaminated water, and exposure to the weather.

The number of respiratory tract infections represents around 12.5 percent of MSF medical consultations, but the constant damp and cold associated with the rains could cause this number to climb. While construction of more permanent shelters is taking place, many people remain in temporary structures made out of plastic sheeting from aid agencies or other materials.

There have been a small number of cases of measles and the World Health Organization (WHO) and the Ministry of Health carried out a vaccination campaign in Labutta internally displaced persons (IDP) camp.

Both malaria and dengue fever are endemic in Myanmar. Though the figures for dengue fever are relatively low, MSF is carefully monitoring the disease in areas where it is working. MSF is also taking part in the WHO-led initiative to prevent further transmission of dengue, a disease particularly risky for children who have little resistance to it. MSF is improving drainage systems and reducing stagnant water in high-risk areas to prevent the breeding of Aedes mosquitoes that spread the virus. 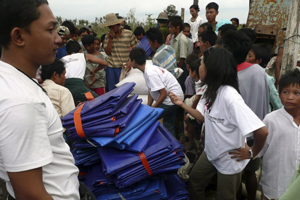 Malnutrition is an ongoing concern. Due to the lack of regular access to food for survivors in remote regions of the delta, MSF is closely monitoring malnutrition levels for groups that are most at-risk in these areas, particularly children under five, and increasing the number of children that it screens. Teams in Bogaley, Setsu, and Pyapon have found that there is a high proportion—15 percent—of children at risk of malnutrition. In a number of its clinics, MSF has already treated some cases of severe acute malnutrition in children. Teams are also providing food supplements to people identified as moderately malnourished to ensure their rapid recovery, and to other vulnerable groups, such as pregnant and breastfeeding women.

The mental health of the survivors of the cyclone is of major concern. In certain areas, MSF teams report that up to 30 percent of their patients have mental health problems related to the stressful events they survived. MSF staff have encountered a large number of patients with profound sadness or depression and complaints like lethargy, anxiety, sleeping difficulties, hyper-tension, palpitations, and other non-specific body complaints that are most likely related to psychological problems.

To address these problems, MSF is integrating a mental health and psycho-social program into its emergency response. MSF mental health officers arrived in the Delta in early June and established a system of support by training community health workers and counselors to assist traumatized survivors. Over the coming weeks, MSF will further scale up its response to the mental health problem.

MSF also has started a school in Labutta Camp for 500 children. This simple initiative has a significant impact, helping to bring routine and some sense of normalcy back into the children’s lives. The school is valued and appreciated by the community in the camps.

The cyclone devastated entire communities. Those that survived are altered beyond recognition. In areas totally flooded by the cyclone only the strongest swimmers and best climbers survived. In some of these areas there are no women left, as more men and younger people survived; many men have lost their entire families.

In one village, 60 men, 6 teenage girls and one baby of 6 months survived. The baby survived because the father climbed a tree and tied both of them to this tree with his sarong. The mother and the other children in the family all drowned. In another village, only one child, a ten-year-old, survived. As the only child in the village he has no one his age to play with, study with or share his grief with.

There are still dead bodies floating in the water; rains have carried them to the surface. The bloated corpses are a constant, distressing reminder to survivors of the cyclone’s toll.

Survivors are trying to deal with the trauma of having lost family, relatives, and friends before their eyes. Many can’t sleep properly. At night, some see the faces and feel the hands of the people they let go during the cyclone, those they couldn’t save. Not only are people grieving the traumatic loss of loved ones, they are also deeply worried about their futures. They have lost their livelihoods; many have no seeds to plant or permanent shelter.

Challenges to working in the delta

Not only are the current rains a major threat to the health of the population—rain means increased exposure for survivors to disease because of the damp and cold—they are also a hinderance in terms of accessing the most isolated communities. Since the cyclone, people have become very cautious and anxious about bad weather. Boatmen, needed to help carry the MSF supplies and teams to remote areas, often refuse to go out on aid deliveries when weather is bad, fearful that there is another cyclone on the way. This hinders the speed with which MSF can get vital aid to survivors that need it. It also makes it difficult for people to go about their daily activities, such as farming or fishing, to make a living.

The logistics of working in the delta are complicated. The scale of this emergency operation is huge because the delta is such a large area with so many scattered villages. A complex and time-consuming system of large trucks, big and small boats are still required to get relief supplies and medical aid to communities in isolated areas. To access communities, staff has to get through a labyrinth of waterways, and often many docks have been destroyed. In certain areas, MSF staff push through thick tracts of mud to access communities. Other areas can only be accessed by walking six hours through the mountains.