On May 2 last year, Nargis Cyclone destroyed everything in its path in the south of Myanmar. It left behind 140,000 dead and missing, as well as immense damage. To help those who survived cope with their grief and suffering, Doctors Without Borders/Médecins Sans Frontières (MSF) teams have been providing mental health support to populations in the Irrawaddy delta for the past 10 months. 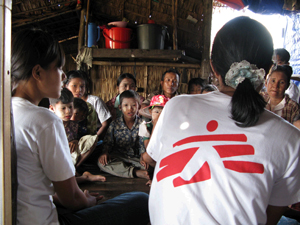 Myanmar 2009 © MSF
MSF councelors provide a therapeutic group session in a village near Setsan in the Irrawaddy delta.

One year after cyclone Nargis massively damaged the Irrawaddy delta, reconstruction work is in process, thanks to the efforts of many national and international agencies. After the first emergency phase ended, emphasis is now put on rebuilding shelters and restoring livelihoods, especially agriculture and fishing. It will still take many years until the situation gets back to normal in the mostly rural areas that compose the southern tip of Myanmar.

No more dead bodies are floating in the river branches that plunge into the Andaman Sea, but the memories of the dreadful event that cost the lives of 140,000 people last year still haunt the two million people who survived and lost their loved ones. To alleviate this suffering, MSF has been providing mental health support to populations in the delta for the past 10 months.

MSF teams intervened within 48 hours after cyclone Nargis hit Myanmar, with dozens of aid workers dispatched to the delta, distributing tons of relief supplies and providing medical treatment. In the following weeks, three MSF mental health experts were sent to the disaster area to assess the situation. They reported that the population was working “on automatic pilot” to take care of basic needs, and noted characteristic reactions such as sleeping disorders, nightmares, and anxiety, especially about future livelihoods. Many people were not only severely traumatized by the event, but also grieving the loss of their relatives. 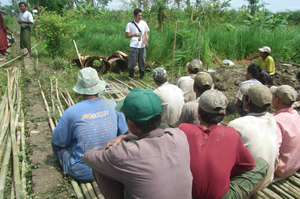 Myanmar 2009 © MSF
MSF counselors presented their mental health program and discussed relaxation exercises in a monastery at Kan Su, a village near Setsan.

From August 2008 to March 2009, MSF counselors provided group counseling to 56,000 Nargis victims. This technique helps to reinforce the natural capacities to cope with a traumatic event. The counselors also held more than 3,100 individual sessions with people who showed severe trauma symptoms or who asked if they could share their thoughts and feelings with them.

MSF also started a psychosocial and mental health intervention training program for local counselors. Thirteen were trained in July and August 2008 and could soon start their work in one of the worst affected areas of the delta, near the town of Setsan.

“The major challenge was that we came to work in a country where mental health is a new concept and a lot of sensitivity and care was needed to explain and clarify what we were actually doing,” says Dr. Sylvia Wamser, MSF clinical psychologist and psychotherapist, who initiated and managed the mental health project in Setsan. “A major factor in our psycho-education and general mental health approach was to integrate existing resources—community as well as religious supports—in our work with the beneficiaries.” 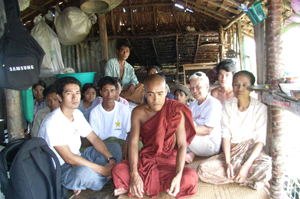 Myanmar 2009 © MSF
An MSF counselor does a group psycho-education session with villagers in Kan Su, near Setsan.

By the end of 2008, MSF counselors noticed that the main presenting symptoms were shifting from post-traumatic stress reactions to anxiety symptoms. This may have been related to the concern about the possibility of future cyclones. As the anniversary of the catastrophe approached, there was a clear need to address this issue and explain to the population that there might be a re-occurrence of old symptoms which they felt after Nargis.

“This is typical for victims of traumatic incidents who have not fully resolved their traumatic experience and thus are getting re-traumatized by isolated stressors,” explains Dr. Wamser. MSF teams have recently distributed thousands of printed leaflets on disaster preparedness and potential anniversary reactions and discussed these issues in group psycho-education sessions.

“Mental health must be an integral part of an emergency intervention and must be started at an early stage of a natural disaster intervention,” says Jean-Sébastien Matte, MSF program manager for Myanmar. “We hope people are now better able to understand and deal with their reactions, and are able to tap into their resources.”