A new, ten-year, multi-billion dollar action plan for global vaccination may fail to deliver if it does not directly address the weaknesses in routine immunization programs. 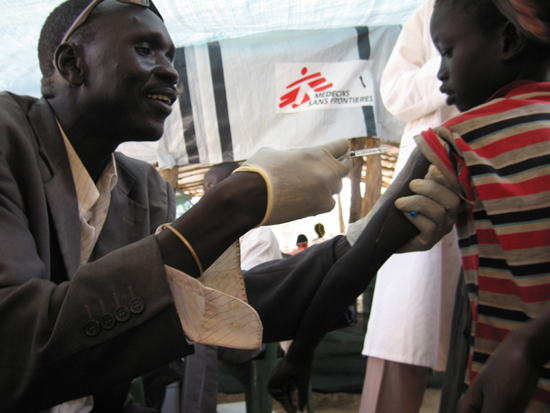 An MSF staff member vaccinates a child against measles in Abathok.

GENEVA/NEW YORK, 15 MAY 2012—A new, ten-year, multi-billion dollar action plan for global vaccination may fail to deliver if it does not directly address the weaknesses in routine immunization programs. One in five children—nineteen million worldwide—are being missed each year and this challenge must be explicitly addressed, the international medical humanitarian organization Doctors Without Borders/Médecins Sans Frontières (MSF) said today.

A "Global Vaccines Action Plan" has been designed to implement the "Decade of Vaccines" project and will be considered by health ministers gathering next week in Geneva for the 65th World Health Assembly. MSF welcomed the increased emphasis on vaccines stimulated by the "Decade of Vaccines" but expressed concern that some key challenges are being glossed over.

“The Global Vaccine Action Plan works on the assumption that basic vaccination programs are going well, and that's just not the reality in many places where we work,” said Dr. Estrella Lasry of MSF. “Focusing on the newest vaccines without boosting existing systems is not a strategy that will benefit the most children: we can’t just keep piling on new vaccines and fail to get the basics right.”

Most vaccines available today are administered as injections requiring trained health workers, which can be difficult in countries with limited health staff. To be fully vaccinated, infants and their caregivers need to come to vaccination points five separate times in their first year of life, which can be difficult for those who live far away or can’t afford the cost of transport. And most vaccines must be kept at cold temperatures, which is logistically challenging in countries with limited refrigeration capacity and unstable electricity supply. There are very few initiatives to date that invest in developing better-adapted vaccines that are easier to deliver. It is concerning that the new Action Plan does not more strongly emphasize this need.

MSF is still regularly responding to outbreaks of vaccine-preventable diseases, largely caused by inadequate routine immunization programs. In 2010, for example, there were measles outbreaks in 28 African countries and, in the Democratic Republic of Congo (DRC) alone, 100,000 cases were reported from January to October 2011. During that period, MSF vaccinated four million children against measles just in DRC. Improving vaccination coverage will require new approaches and easier-to-use products adapted for developing countries.

Twenty percent of all the babies born in the world each year—the equivalent of nearly five times the children born yearly in the United States—are not getting the basic vaccines they need to be protected from killer diseases. This alarming international figure is backed up by specific low coverage rates in some regions, states, and countries. For example, in India’s Bihar state, 60 percent of babies are not fully vaccinated.

“Reaching these unreached children will require prioritizing easier-to-use vaccines,” said Kate Elder, vaccines policy adviser at MSF’s Access Campaign. “There is an urgent need to invest in the development of products that make vaccines easier to give. We also need to open up a discussion on how to deliver vaccines to reach children in the most remote areas.”

“Countries are about to endorse a plan that does not go nearly far enough,” said Elder. “Governments need to pay more attention to boosting routine immunization and insisting that products are adapted to make them easier to use.”

While the renewed focus on vaccines is crucial, it is concerning that some countries have seen little progress in improving the number of children getting immunized over the last ten years. In 2006, DRC, India, Nigeria, Ethiopia, Indonesia, and Pakistan were among the top ten countries identified as having a disproportionately high number of unimmunized children. In 2010, they remained on the list. Progress has been too slow to decrease the number of children vulnerable to vaccine-preventable diseases.

Each year MSF teams vaccinate over 10 million people, primarily as outbreak response to disease such as measles, meningitis, diphtheria, pertussis, and yellow fever. MSF also supports routine immunization activities in some projects where we provide healthcare to mothers and children. In a new report released today, “The Right Shot: Extending the Reach of Affordable and Adapted Vaccines,” MSF outlines the price and adaptation barriers to reaching more children with life-saving vaccines.