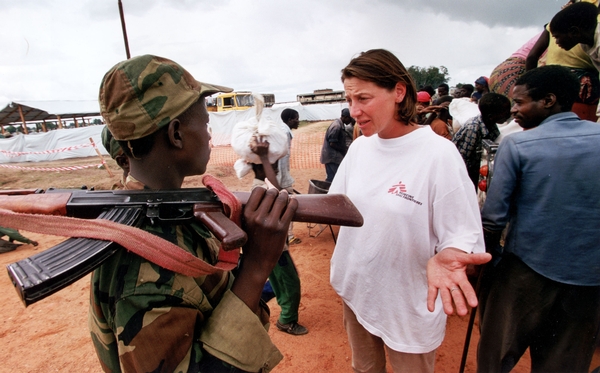 Inspired by MSF’s fierce internal debates on the evolution of its independence as a humanitarian organization, Humanitarian Negotiations Revealed: The MSF Experience offers a candid, self-critical examination of MSF’s decision-making processes in a dozen countries, including Afghanistan, Myanmar, Somalia, Sri Lanka, and Yemen.

The book, released in conjunction with MSF’s fortieth anniversary, reflects on MSF’s medical humanitarian efforts over several decades—some successful, some less so—and aims to ignite wider discussions of humanitarian ambitions and the best ways of fulfilling them.

“Humanitarian negotiations have life-or-death consequences for people in need,” said Sophie Delaunay, executive director of MSF-USA. “As MSF weighs the risks of delivering humanitarian aid in precarious situations, such as Somalia, it seems more important than ever to lift the veil that often obscures the difficult choices our teams confront on a daily basis.”

The book consists of a series of case studies, followed by thematic essays, which examine the delicate balance between upholding MSF’s founding principles of independence, neutrality, impartiality, and speaking out; and the practical realities of delivering humanitarian aid in complex and dangerous political environments.

In conjunction with the launch, MSF will present a live, interactive webcast, “At Any Price? Negotiating Access to Crisis Zones,” free and open to the public, on Tuesday, January 31, at 8:00 p.m. EST. A panel of experienced MSF aid workers, including Michael Neuman, one of the authors and editors of the book, will discuss their experiences in conducting humanitarian negotiations in the field.

Panel discussions, featuring editors of the book and other guest speakers, will be held at the Boston Public Library on Wednesday, February 1, at 7:00 pm, and at The New School’s Tishman Auditorium in New York City on Thursday, February 9, at 7:00 pm. Both events are free and open to the public; register online a here.

“With a refreshing honesty, it explores the thin line that humanitarian agencies tread between saving lives and supporting oppressors. This brave and informative book reconfirms MSF as an organization that thinks as well as acts.”

“This is a very valuable book. It shows one of the world's great humanitarian organizations thinking aloud about the difficult choices it faces as it struggles to save and protect human life.”