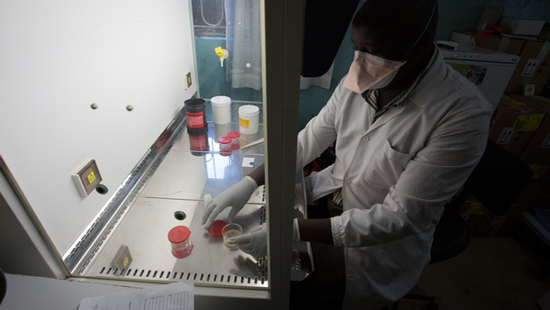 The data, presented at the forty-third annual Union World Conference on Lung Health in Kuala Lumpur, were collected from 25 MSF projects in 14 countries over a nearly 18-month period, where the new diagnostic test, Xpert MTB/RIF, was utilized. The new testing method resulted in an average 50 percent increase in laboratory-based diagnosis of TB, compared to sputum smear microscopy, the most commonly used TB test.

“This new TB test is helping expose the true size of the drug-resistant TB epidemic and get people on treatment faster,” said Dr. Helen Bygrave, HIV/TB specialist with MSF in South Africa. “But patients and doctors alike still struggle with the long and painful treatment for drug-resistant TB that only manages to cure about one in two people.”

The Xpert MTB/RIF test, which provides results within two hours, also detects resistance to one of the primary TB drugs, rifampicin. In an MSF project in Zimbabwe, preliminary results showed that the introduction of the test resulted in a near quadrupling of DR-TB diagnoses. In an MSF project in Swaziland, the delay between collecting a patient’s sample and starting DR-TB treatment was reduced by 79 percent, from 65.9 days to 13.9 days.

While data from the implementation of Xpert MTB/RIF revealed problems with inconclusive test results, and a simpler and easier-to-use "point-of-care" test is still needed, the test clearly represents a significant advance for timely TB and DR-TB diagnosis, and its roll-out should be encouraged.

However, the treatment of DR-TB continues to be woefully inadequate. Patients must undergo a two-year treatment with drugs that cause intolerable side effects, such as persistent nausea, psychosis and deafness. Results from MSF’s cohort of DR-TB patients show a cure rate of only 53 percent, which is slightly higher than the global average of 48 percent.

Two new drugs to treat TB—the first to be developed for the disease in almost 50 years—are expected to come to market in 2013 and are both active against drug-resistant forms of the disease. Their introduction represents a critical opportunity to improve DR-TB treatment and every effort should be made to ensure they are used in a way that allows treatment to be made more tolerable, affordable, and accessible to patients in developing countries.

“With new medicines for drug-resistant TB at the doorstep for the first time in half a century, the global health community can’t afford not to seize the opportunity of a lifetime by stopping drug-resistant TB from spiraling out of control,” said Dr. Manica Balasegaram, executive director of MSF’s Access Campaign.

MSF has been treating TB for 25 years. In 2011, 26,600 TB patients were treated in MSF-supported projects in 39 countries. Half of these projects involved treating multidrug-resistant TB (MDR-TB), with a total of 1,300 patients in 21 countries. MSF is now one of the biggest nongovernmental providers of MDR-TB care worldwide.