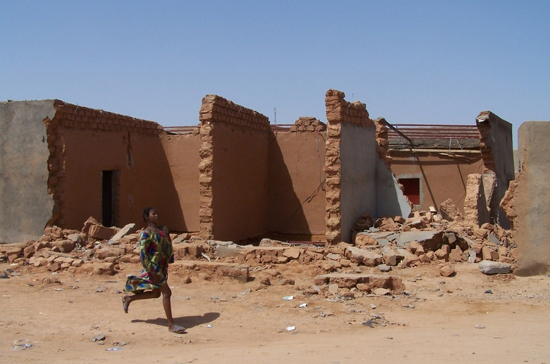 A woman runs past a flood-damaged building in Agadez.

“The situation in Agadez is dramatic. It looks as if the city has been hit by a large-scale earthquake and the needs are enormous,” says MSF's head of mission, Giorgio Calarco. Approximately 3,500 houses were destroyed and 28,000 people left homeless due to the floods that are reported to be the worst in recent memory. Most of those who lost their homes sought refuge with host families, while approximately 10,000 people, including many pregnant women and children under five, have found shelter in 13 schools.

Having assessed the situation in the flood-affected areas of Agadez, MSF teams started providing emergency medical assistance through a mobile clinic, which visits the displaced families sheltered in the schools and refers patients to the three health centers that MSF supports in the city. MSF is also planning to distribute non-food items, such as soap and hygiene kits, to approximately 2,000 displaced families and build latrines in some of the schools that are hosting families. On September 6 an MSF truck with drugs and a cholera kit containing drips, antibiotics, plastic cover sheets, soap, disinfectant, and chlorine, reached Agadez, and will be used if cholera cases appear.

There are reports that in areas outside of the city, more than 7,000 people have been displaced due to the floods. However, access to these people is difficult because of the alarming insecurity in the area.

MSF has been working in Agadez since May 2009, supporting three health centers for the provision of free health care for mothers and their children. MSF is also running nutritional projects in Madaoua and Bouza. In the following months, MSF teams plan to carry out a measles vaccination campaign for children between the ages of six months and five years.