Treatment provided is futile if children return to contaminated sites and continue to be exposed to high lead levels. Villages known to be contaminated must urgently be cleaned up, so that exposure to lead is prevented. 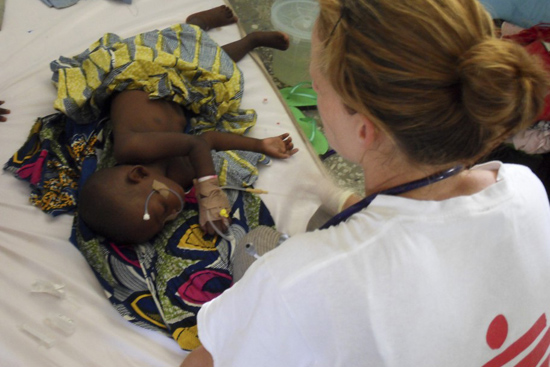 Earlier this year, cases of lead poisoning in children and adults were confirmed in five villages in Zamfara State, northwestern Nigeria. Investigations conducted in April and May by Nigerian authorities and Doctors Without Borders/Médecins Sans Frontières (MSF) teams reported 163 deaths suspected to be linked to lead poisoning. This estimate was based on information provided by villagers and health workers, as well as deaths recorded in MSF-supported health facilities. Since May 2010 however, two more villages have been identified with high lead levels, bringing the total to seven known contaminated villages.

“This increase shows that the problem is probably more widespread than we originally believed, and that the scope must continue to be investigated,” said Gautam Chatterjee, MSF country manager in Nigeria. “The situation demands coordination by Nigerian authorities and international organizations to urgently address this unprecedented situation.”

Since May, MSF, with the support of local authorities, has been providing lifesaving chelation treatment to young children and breastfeeding mothers, who are most vulnerable to lead toxicity. MSF will continue to provide emergency treatment to prevent deaths and mitigate serious medical consequences in patients. However, the treatment provided is futile if children return to contaminated sites and continue to be exposed to high lead levels, as they may suffer again the consequences of lead poisoning. Villages known to be contaminated must urgently be cleaned up (remediated), so that both children's and adults’ exposure to lead is prevented.

Although two of the seven identified villages have been remediated by an environmental clean-up organization, much more needs to be done. The local population must also receive on-going health education talks about the risks associated with exposure to lead poisoning.

The lead poisoning is a consequence of villagers practicing small-scale gold extraction from lead-containing ore. The processing of the ore involves crushing and drying, often inside the homes of villagers, resulting in the contamination of soil and increasing the risk of lead poisoning.

Almost  400 children and more than 100 breastfeeding mothers have been treated with chelation therapy in the two medical centers managed by MSF. The treatment facilities are located in Anka town and in Bukkuyum town in Zamfara State. The treatment is only effective if patients do not return to contaminated sites; otherwise they are at risk of recontamination.

Remediation—the decontamination process involving the removal of affected soil—is a lengthy and costly process and only two of seven villages have been remediated thus far. Remediation is currently being managed by an environmental clean-up agency, Terragraphics, funded in part by the Blacksmith Foundation.