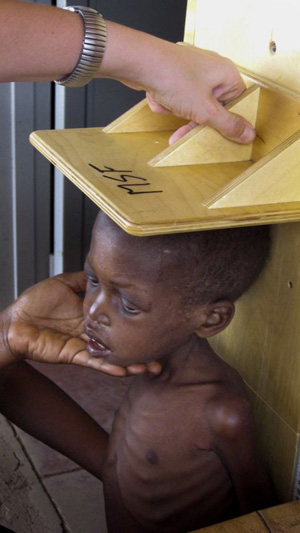 MSF staff examine a child for malnutrition at a stabilization center in Kirundo.

About 560,000 inhabitants of Kirundo province in northern Burundi, most of whom are farmers, are facing a food crisis. More and more children are suffering from malnutrition due to the shortage of food. Thousands of inhabitants are believed to have fled to Rwanda, Uganda, and Tanzania, all in search of food. Doctors Without Borders/Médecins Sans Frontières (MSF) launched an emergency intervention in the province on February 4.

"We are noticing that people are really starting to panic,” said Félix Tran, MSF coordinator in Kirundo province. "An initial poor harvest in December triggered the current crisis. In February, a second poor harvest would result in catastrophe for many of the local inhabitants. Everyone here is only too aware that the crisis is serious."

In December 2008, harvests were lost following low levels of rainfall. Today, their hopes rest on the February rains. So far, however, it has rained only once; it normally rains every day during the rainy season.

"When you arrive here, the landscape is so green ... you wonder how it can be possible that people are starving?” said Tran. “But the more you move around, the more you realize that the earth is arid, and that drought has made all cultivable land barren."

The team first renovated a stabilization center in the hospital in Kirundo, the province's main town, focusing on reconnecting the electricity and water supplies. In this center, malnourished children suffering from medical complications are hospitalized and receive round-the-clock supervision from the MSF medical team.

"The stabilization center's capacity was 40 beds. After one week, 45 children with severe malnutrition had already been admitted. So our second challenge was therefore to increase this capacity to around 100 beds," said Tran.

Today, two weeks after the start of activities, the stabilization center in Kirundo has admitted a total of 95 severely malnourished children, with 62 children remaining hospitalized. Anne Khoudiacoff, an MSF nurse, explained that several children arrived in critical condition. "It is often very difficult to cope with," she said. "They suffer from both clinical forms of acute malnutrition: marasmus and kwashiorkor. Children suffering from marasmus are extremely thin. Those suffering from kwashiorkor are, in contrast, swollen." Since the program began, six children have died.

Malnourished children who have no medical complications are monitored in one of the 21 therapeutic outpatient programs organized in the province's health centers. Every week, they receive rations of therapeutic food, along with a ration of corn and soy for their family. According to local health centers, some 2,000 children have already been registered in the outpatient nutritional program.

A mobile MSF team visits all these centers to replenish their stocks of therapeutic food and check on patients. The most serious cases—children who have medical complications—are referred to the Kirundo stabilization center. "These children are at risk of dying in the hills if we do not go looking for them," added Khoudiacoff.

Today, MSF is stepping up its help to the province's therapeutic outpatient programs. The objective is twofold: to offer increased care and, in so doing, to prevent children who leave the stabilization center from relapsing into malnutrition and having to return to hospital.

In Kirundo, if the rain does finally fall, the next harvest will not come until May. "If we had arrived a month later, many children would have no doubt died already," said Khoudiacoff. "We sense that this is the start of the crisis. By intervening early enough, we can really make an impact."

The MSF team in Kirundo consists of six international staff and about 30 Burundian colleagues, including doctors, nurses and logisticians. MSF has been working in Burundi since 1992 and is currently managing a sexual violence program in the capital Bujumbura. MSF also runs 12 maternity clinics, including the treatment of obstetrical emergencies in the rural province of Bujumbura.