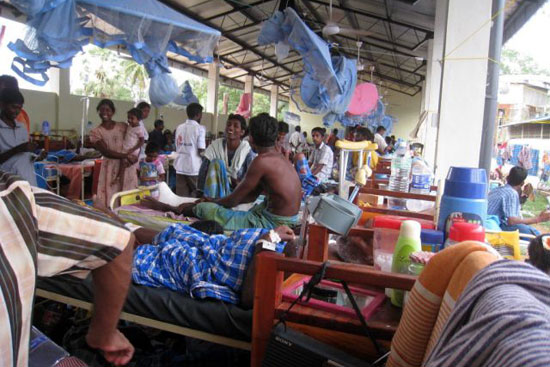 At the General Hospital of Vavuniya, MSF staff provide surgical care to people wounded during the war in northern Sri Lanka.

Doctors Without Borders/Médecins Sans Frontières (MSF) is still providing surgical and medical health care to the displaced people in Vavuniya district, northern Sri Lanka. Some war-wounded need specific medical care, like orthopedic surgery, and around 95,000 people remain in Manik Farm camp. Additional medical capacities could be needed in the areas of return, as a result of the resettlement process.

After the release of the last 125,000 displaced people remaining in Manik Farm camp, in northern Sri Lanka, on December 1, the MSF team working in the hospital nearby noticed that many of the displaced intended to stay in the camp until they would be resettled. A few thousand left the camp with their temporary passes, mainly to look for family in the nearby area. Most of them did not leave. The majority of the displaced have no resources and depend on aid to move and rebuild their lives at home.

During the last months, tens of thousands of displaced have been resettled in other districts, mainly Jaffna and Mannar. Return has started in few villages in the Vanni—the former war zone, an area where most of the health structures were damaged during the conflict.

MSF has been discussing with the Sri Lanka Ministry of Health the medical support MSF could provide in the areas of return. In Jaffna peninsula, where tens of thousands of displaced people have recently arrived from the Vavuniya camps, MSF has been working with the ministry of health at Point Pedro hospital for years. In the Vanni, MSF has previous experience working in Mannar, Mullaitivu, and Killinochi districts.

Restoring the health services after years of conflict represents a huge task the health authorities have shown willingness to respond to. As more people return to these areas, MSF expects demands for health care services to increase and is ready to support the health system during the rehabilitation period.

Surgical activity for war-wounded is not over

During the last six months, one of the main tasks has been to provide surgical care to some of the thousands of war-wounded, complementing or within ministry of health hospitals.The main causes of hospitalization among the 3,000 patients admitted to the MSF hospital from June to the end of November are trauma and wounds. In this hospital, MSF has treated over 500 trauma cases related to the conflict. More than 200 of them needed at least one surgical intervention, for example to remove shrapnel pieces.

In total, over 1,350 surgical procedures have been performed between June and end of November in the MSF hospital.

The number of hospitalizations is quite stable at around 150 per week. The majority of the patients hospitalized come from all the zones of Manik Farm. They are referred by the ministry of health medical staff who work in the medical structures in the camp.

There has been a constant increase in the number of consultations for outpatients, with an average of 750 consultations per week since August. People also came from Manik Farm village in the last weeks. The main morbidity as indicated by the outpatient clinic is respiratory tract infection at 20 percent of the cases, while almost a quarter of the patients come for wound dressings.

Since November, MSF specialists have worked with the College of Psychiatrics of Sri Lanka and the ministry of health in order to provide qualified mental health care for people traumatized by the war. Seven months after the end of the fighting, it is urgent that the people who were in the Vanni get access to psychiatric and psychological care, not only in hospitals.

MSF is also responding to gaps in the global aid provided in the camps in Vanuniya District—supplementary feeding programs for vulnerable members of the population and supplies of drinkable water in some zones. Teams have worked on emergency preparedness in coordination with the ministry of health in case of epidemics during the Monsoon.