One Family's Plight in Storm-Ravaged Haiti 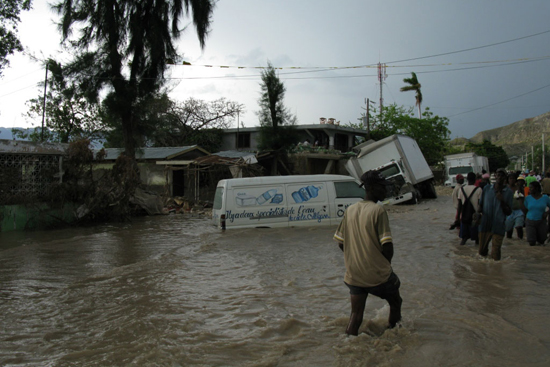 A man walks through floodwaters in Gonaïves.

Lionel, a 22-year-old carpenter, was at home on September 1 with his wife, who was seven months pregnant, in the Brale area in Gonaïves, Haiti. At about 11 p.m., the water started rising. As it began to spread under the bed, they knew they had to move. Within two hours, the water was four meters above ground level.

Tropical Storm Hanna was bearing down on Haiti, compounding the havoc and devastation already wrought by Tropical Storm Gustav a few days earlier. Hurricane Ike and its own massive rains had yet to arrive.

Lionel and his wife managed to access the roof of one the highest houses in the area, from where they could see the street disappearing under the rapidly rising water. They saw other people, who had sought refuge on top of a lower building, dragged away by the swelling flood. 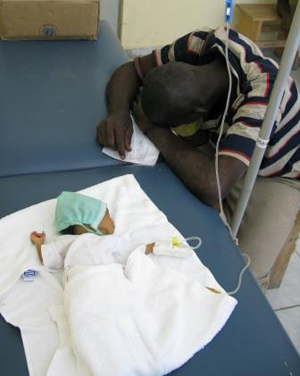 Lionel, 22, sits with his baby boy while the child receives treatment at the MSF clinic in Raboteau.

Lionel’s wife, under stress, gave birth to a baby boy on the roof. They spent the following five days there, stuck, along with 25 other people, with no food or water. They have lost everything, their house swallowed by the flood.

When the waters finally receded, they went to the Doctors Without Borders/Médecins Sans Frontières (MSF) clinic in Raboteau. Their premature baby was dehydrated, but after a couple of hours of rehydration treatment and additional medical care, he was back to normal and the whole family could leave the clinic.

Since they had nowhere to stay, Lionel and his family went to a friend’s house in Gonaïves, avoiding the area where they used to live because of looting at night. But the lack of clean water and food in Gonaïves has had direct consequences for the baby boy.

On Thursday, September 11, Lionel returned with the child to the clinic. He had developed an umbilical infection, and his mother, also sick, had become too weak to feed him. They weren’t alone in seeking care; more than 700 other people had been treated so far by MSF at the clinic.

The Raboteau health center remains one of the few functioning clinics in Gonaïves, and MSF has been providing primary health care and performing minor surgical procedures there since September 5.

After another day of treatment, Lionel’s baby is now in better condition. “We can do our best at the clinic here,” said MSF Doctor Vladimir Gratia. “But,” he warned, “with a lack of hygienic living conditions, the situation will get worse.”

Enormous needs remain in Gonaives, especially with people beginning to trickle back into the city. Clean water and food are priorities. For Lionel, his wife, and their new baby, as for everyone in Gonaïves, life remains precarious.