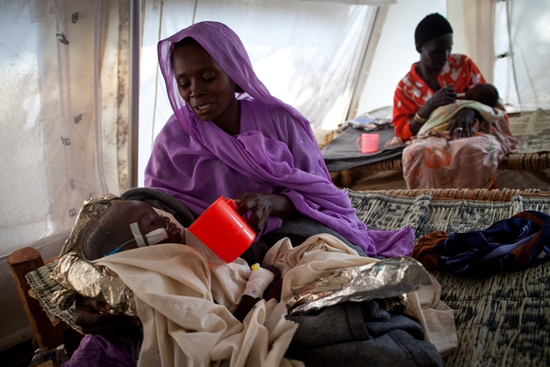 Asha Jibril cares for her malnourished two-year-old daughter Aziza Haran in the ITFC at MSF's field hospital in Batil camp.

Many of the refugees from Sudan’s Blue Nile State who have fled to Maban County in South Sudan’s Upper Nile State had family members who could not complete the journey and died before they reached Batil camp. In some cases, they said their relatives died because they were “tired of walking,” which illustrates the weakened, vulnerable state in which much of this population arrived at the camp. It also points to the massive need for assistance for those that managed to arrive alive.

To put this in perspective, for children under five, this is more than double the emergency threshold, and more than four times the norm in a low-resource setting—meaning that four times as many children are dying now in Batil than we would expect to see if everything were “normal.”

Additionally, though, more than 25 percent of reported deaths were for people older than 50. In many emergency interventions, children under five are the first priority, but to see this level of mortality in over-fifties is unexpected and serves of further indication of a very vulnerable and weak population.

Diarrhea has been the cause of death for more than 90 percent of fatalities reported while these refugees have been in Batil, an astounding number. Malnutrition was a factor in many of the deaths.

More than quarter of the children under five in the camp—27.7 percent, to be precise—are malnourished, and 10 percent are in the most severe acute stage of malnutrition and require urgent therapeutic feeding.

Even more shocking, 44 percent of the children under two years old are malnourished, with 18 percent of them being in the most severe, potentially life-threatening stage of malnutrition.

MSF has more than 180 expatriate staff and more than 800 locally recruited staff on the ground in the five refugee camps for Sudanese refugees in South Sudan. The first emergency interventions were started in November 2011 when refugees first arrived in Yida and Doro camps in Unity and Upper Nile States, respectively. MSF rapidly expanded its emergency activities over the following months as the number of refugees grew, as the rainy season started, and as the health situation in the camps deteriorated.

In its tented field hospital in Batil camp, MSF now has more than 1,600 children suffering from severe acute malnutrition in the therapeutic feeding program. Every week, about 30 of these children need to be admitted into intensive care with life-threatening medical complications such as diarrhea or respiratory diseases. Since the Batil camp was set up in May, MSF has conducted more than 14,500 medical consultations, while also assisting with the set-up of water distribution networks and the distribution of basic survival essentials.

“This new data reflects exactly what I see every day,” says Helen Patterson, MSF’s medical coordinator for Batil camp. “This is a health catastrophe. With nearly half the children under two years old malnourished, and living in cold, wet conditions, and hundreds falling ill with diarrhea and respiratory diseases, our field hospital is overwhelmed with critically ill patients. We’re pushing the boundaries of what’s possible logistically to get staff and supplies here and continue saving lives.”

Note on time period of the data presented: