Some areas cut off from assistance 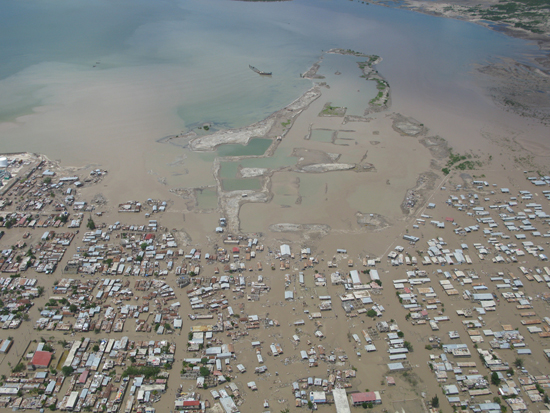 Since arriving in the northern Haitian city of Gonaïves on September 4, one of the worst affected areas in the country, Doctors Without Borders/Médecins Sans Frontières (MSF) teams have carried out 641 medical consultations and performed 25 surgical procedures. Half of the people screened so far by MSF have suffered at least minor injuries. The remaining patients are suffering from diarrhea (and related dehydration), respiratory diseases, infections, and skin problems linked to polluted water, with such cases on the increase. While most of the patients are adults, an increasing number are children.

With floodwaters now receding slightly, people are beginning to return to Gonaïves, adding additional stress on already strained health and sanitation facilities. Temporary health clinics in some schools are lacking basic materials and equipment. MSF teams have donated medical materials and plans are underway to open a field hospital in Gonaïves.

At the Rabouteau Health Center in Gonaïves, MSF has carried out over 150 consultations as of yesterday. One-third of the people examined were children under five years of age. Two water bladders were also set up at the center in order to provide clean drinking water, which is in very short supply in the city.

Access to other hurricane-affected areas outside of Gonaïves is extremely difficult; many roads and airstrips are flooded, bridges are destroyed, and there is a general lack of fuel, which is reducing, if not preventing, relief assistance—including clean water, food, or basic medical needs—from reaching many parts of the country. MSF is doing its best to access these areas to provide adequate care to affected populations and to monitor the health situation.

On Monday night, MSF sent an additional five vehicles and one truck to Gonaïves by boat. In the coming days, a team of four medical personnel and two logisticians will attempt to start mobile clinics and surveillance activities in the northwest area between Gonaïves and Port de Paix (including Terre Neuve, Anse Rouge, and Gros Morne) which has an overall estimated population of close to one million people. An additional 13.2 tons of medical and logistical materials (medical kits, pumps, tents, mosquito nets, water treatment kits, water tanks, generators, and blankets) are on the way from Europe and from Panama.