An Overview of MSF Programs in and around Syria

The conflict in Syria has left an estimated 6.8 million people in urgent need of humanitarian need, both inside and outside the country. 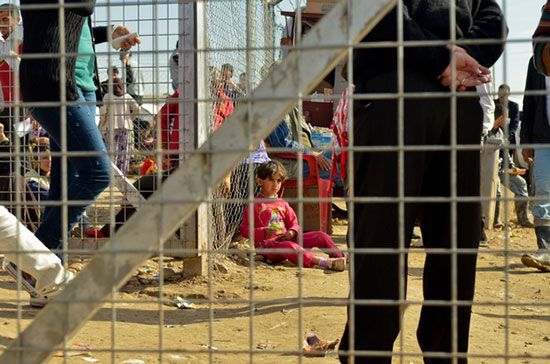 The conflict in Syria is extremely intense. Frontlines continue to shift. The medical system has been reduced to tatters. An estimated 6.8 million people are in urgent need of humanitarian assistance inside Syria and in neighboring countries. And people in enclaves are cut off from assistance.

Despite the very real challenges of operating in the country, Doctors Without Borders/Médecins Sans Frontières (MSF) is now running five hospitals inside Syria and is increasing mobile clinic activities around some of these hospitals. Simultaneously, MSF is actively seeking to open new projects where it is safe to do so.

MSF is using only private donations for its work in Syria in order to remain entirely independent of all political positioning around the crisis.

MSF is also working in Syria's neighboring countries: Iraq, Jordan, Lebanon, and Turkey, where some 1.5 million Syrians have fled. These countries have been overwhelmed by the influx of refugees and the humanitarian response has so far been unable to meet their needs.

Within Syria, MSF is scaling up its operations as fast as is safely possible, but activities are still limited to five pockets of the country where MSF teams have the space and relative safety to provide high-quality medical services. While MSF continues to negotiate for access through Damascus, for now it is only possible for MSF to work in opposition-controlled areas.

Near Aleppo an MSF hospital has so far provided almost 15,000 consultations and 446 surgical operations. The teams have also attended 601deliveries. In a transit camp at the border with Turkey, MSF distributed non-food items (mats, hygiene kits, cooking kits, etc.) for the families temporarily living there, vaccinated 3,300 children against measles, and carried out water and sanitation activities. Medical supplies were provided to eight health centers in the Aleppo governorate. Another MSF team set up a blood bank (now handed over to Syrian doctors) to supply hospitals in the Aleppo area, and supported EPI activity in a health center for children as the war had brought normal vaccination activities to a halt.

In Idlib governorate, MSF has two hospitals. “We’re on permanent stand-by for mass casualty influxes, but on a day-to-day basis this is not our core activity,” says Alex Buchmann, recently returned project coordinator of one of the hospitals. “Any medical services that are still somehow operational in this area are focused on war wounded, so for people with difficult pregnancies, chronic diseases, fevers, or general illnesses, the only options are our hospital and mobile clinics. Sometimes there are wounded, but all the time there are other illnesses that need treatment.”

The other MSF hospital in this area has a highly specialized trauma and surgical department that has performed more than 1,324 surgical operations so far, mainly for violence-related injuries, and more than 3,699 patients have received emergency care, including many patients with extensive burns sustained from accidents with home heaters or when using home-made crude oil refining kits. Physiotherapy care is also provided to patients after surgery, in the hospital, or in a post-operative unit. MSF is increasing its support to Syrian medical facilities in Idlib area where four field hospitals and 19 advanced medical posts are now provided with drugs and medical material.

To improve the water and sanitation situation in a camp for internally displaced people (IDPs), MSF built 50 latrines and 40 showers and distributed as well 350 tents to displaced people. A vaccination campaign was organized for children under five during which 3,300 were immunized against polio and 2,000 against measles.

In Al Raqqah governorate, fighting and bombing in and around Al Raqqah town has led to repeated displacements of the population in the area. Public buildings and many households are full of IDPs and water and sanitation systems are overwhelmed. MSF has already seen some 400 measles cases, a clear sign of the collapse of the health care system. On April 15, the MSF team opened a primary health care clinic in Tal Abyad district. MSF has also started antenatal care and soon will offer maternity services.

In March, MSF opened a clinic in Al Hasaka governorate, a rich oil-producing and grain-growing province of Syria, home to a Kurdish population. MSF is treating trauma cases and providing post-operative care. MSF also supports an operating theater in the area and conducts regular trainings.

Most of the MSF teams are also engaged in mobile clinic activities and some of the projects have introduced a mental health service, which is critically needed after two years of intense conflict. MSF also has extensively supplied medical and emergency relief supplies to hospitals and clinics on both sides of the conflict in Syria, including Aleppo, Al Raqqah, Damascus, Deir Ezzor, Deraa, Hama, Homs, and other areas.

Activities Inside Syria by the Numbers (Up to April 2013)