As fighting intensifies in Pakistan's Kurram Agency, displacing thousands, MSF is increasing its support to area hospitals and preparing to respond to new waves of wounded. 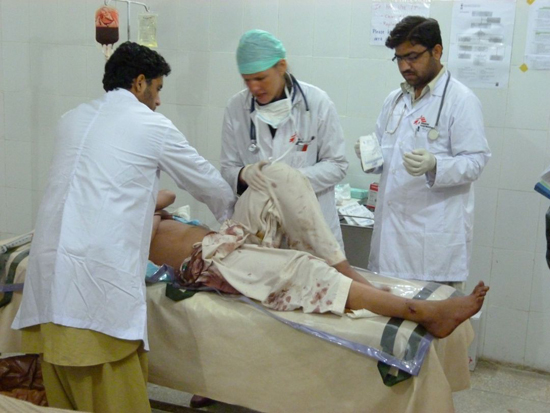 A blast victim in stablized at an MSF facility in Hangu.

This past week, Pakistan’s armed forces began a large-scale military operation in the Kurram Agency in the Federally Administered Tribal Areas (FATA). MSF has subsequently witnessed an increase in the number of consultations in the pediatric ward of Sadda hospital. This is mostly due to an influx of people who were displaced by the conflict.

In recent years, the intensification of the conflicts in FATA led to population displacements, disrupted supply lines, isolated local population, and contributed to the near collapse of the health care system in the area. This raises grave concerns about the impact this new round of fighting will have in Kurram and beyond.

In response, MSF is stepping up its support to Sadda hospital. The ambulance capacity will be increased to insure good referral conditions, notably for severely injured patients. MSF teams are looking for a bigger observation room that would make it possible to set up more beds in our pediatric ward, and insuring the supply of supplementary drugs in MSF projects. Our teams are also discussing with the local health authorities a possible collaboration in case of an influx of wounded or an epidemic.

However, this increased support remains insufficient. For several years now, the limitation of access to Kurram for our international staff, including medical specialists, has proscribed our interventions. The support provided by MSF could be extended and replicated in other hospitals—in Kurram and in other FATA agencies—if access restrictions to these areas were eased.

Doctors Without Borders/Médecins Sans Frontières (MSF) has been the only international medical organization permanently present and active in Kurram Agency since 2004. Our services include pediatric support in Sadda and Alizai, treatment of cutaneous leishmaniasis in Sadda, and transfer of patients to hospitals in Hangu or Peshawar for urgent medical or surgical treatment.

MSF has been working in Pakistan since 1986, providing free medical assistance to Pakistanis and to Afghan refugee or displaced populations, to victims of conflict, and to people with limited access to care. MSF also delivers health care services to mothers and children and intervenes in the event of epidemics and natural disasters. Our objective is to ensure that all patients can get access to life-saving medical care, and we therefore support health facilities where gaps are the most important. Currently, in Khyber Pakhtunkhwa Province and FATA, MSF teams are present in Kurram Agency, Hangu, Lower Dir, Peshawar, Malakand and Swat districts. MSF is also working in Balochistan and Sindh provinces.

MSF has a strict “no-weapons” policy inside the facilities in which we work and urges all members of the community, political parties, armed forces and armed opposition to respect the neutrality of health structures and to respect medical staff. These are prerequisites to our presence and our involvement.

To ensure its independence, MSF solely relies on private financial contributions from individuals around the world, and does not accept funding from any government, donor agency, nor from any military or politically affiliated group.