As water recedes in some areas, it is increasing in others as rain continues to fall and the needs grow increasingly urgent. 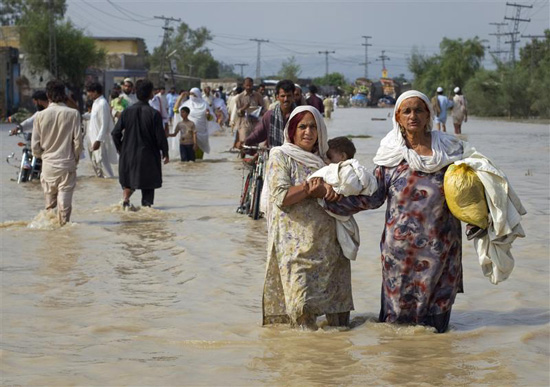 Women wade through flood waters with their children while evacuating from Nowshera, located in Pakistan's northwest Khyber-Pakhtunkhwa Province August 1, 2010.

According to the official figures, the severe and unrelenting floods in Pakistan have affected 4 million people and 1,600 people have died. Although water is receding in some areas, it is increasing in others as the rain continues to fall, and the needs of people who had to leave their homes are growing increasingly urgent. The response of Doctors Without Borders/Médecins Sans Frontières (MSF) is likewise increasing. The focus, at present, is on providing drinking water, basic relief items, and medical care.

“It is very difficult to get a complete picture of the extent of the needs,” said Alan Lefevre, MSF Emergency coordinator. “Many areas of Khyber Pakhtunkhwa province are still only accessible by air. As more heavy rains are expected, the situation in provinces such as Punjab, Kashmir, or Sindh is still very unclear.”

As weather permits, MSF teams are carrying out assessments by helicopter to affected areas that are still only accessible by air. On August 5, an MSF assessment team flew by helicopter to the districts of Swat, Peshawar, Nowshera, and Charsadda in order to assess the situation of thousands of people affected by the flooding.

“The situation in Charsadda and Nowshera districts is catastrophic,” says Lefevre, who was aboard the helicopter. “In areas surrounding Charsadda town and in the whole Nowshera district, we found entire villages that have been washed away. The people are just living outdoors, next to their destroyed house, and have not received any help.”

In the north of the Swat valley, the population is likely to remain cut off from aid for a long time because the roads and bridges leading into the region have been washed away.

The floods have significantly impacted health structures, particularly their drug supplies. MSF is supporting hospitals and health centers in Nowshera, and Peshawar districts.

In Pabbi Hospital in Nowshera, MSF medical teams are receiving rising numbers of patients—up to 295 consultations were carried out on Thursday—most of whom are suffering from skin disease and acute diarrhea.

In the Nowshera District Headquarters Hospital, MSF is focusing on the emergency room and the outpatient department, performing more than 320 consultations through August 5. The rehabilitation work in the hospital to make it functional is ongoing and three ambulances have also been provided, ensuring around 10 referrals per day.

“Although the hospital has not been so [badly] damaged, everything has been flushed away by the flood so the hospital has literally run out of drugs and equipment,” said Thomas Conan, MSF Country representative in Pakistan. “Our medical team is making sure that patients coming for consultation can actually go home with the drugs they need. Our next step in the coming days is to make sure that the emergency room can remain open 24/7, as there is currently no other round-the-clock free-of-charge health facility available in Nowshera.”

MSF mobile medical teams are also working to reach people who have left their homes and gathered in schools or other isolated areas. On Thursday, three mobile clinics provided 300 consultations in three different sites around Charsadda and Peshawar.

The MSF medical programs that were already in place before the floods are also seeing more patients with diseases linked to the floods. In Dargai, in Malakand district, the teams have started new mobile clinics. In Baluchistan, mobile clinics will start providing care in affected zones on Monday.

Provision of clean water remains a priority as well, a crucial element in the prevention of the spread of waterborne diseases. Twenty-one water points were set up in Charsadda, in Lower Dir, and in eight localities in Swat, to serve approximately 100,000 people. In addition, MSF also provides clean water to the district hospital in Lower Dir and is working on restoring drinking water provision in the Nowshera area.

MSF continues to distribute hygiene kits to families displaced by the floods. Distributions are taking place today in Charsadda, targeting about 500 families. Another 500 families who have sought refuge on the side of the motorway between Charsadda and Peshawar will also receive emergency relief items such as cooking sets, hygiene and shelter kits, and chlorine tablets. In Tangi, north of Charsadda, MSF has identified families who have lost their houses and who live in schools.

In Baluchistan, where very few aid organizations are present, MSF distributed tents and hygiene kits to about 750 families in Bakhtirabad, one of the worst affected towns in the province. In Fadfedar canal, MSF teams distributed hygiene kits, cooking sets, and jerrycans to 250 families. Large pockets of people in need of humanitarian assistance have already been identified around Manjoshori and Kabula and distributions for 5,000 families will start on Sunday.

A first cargo plane carrying 60 tons of water and sanitation equipment, drugs and logistical material departed from Europe last night. Another 50 tons of relief supplies will be sent in the next few days. More international staff is also being sent to Pakistan as well. In the coming days, 100 international staff should be on the ground working alongside 1,200 national staff.