A massive influx of wounded people is putting a severe strain on health services in Pakistan's North West Frontier Province. MSF is providing support in Mardan, Lower Dir, and Malakand. 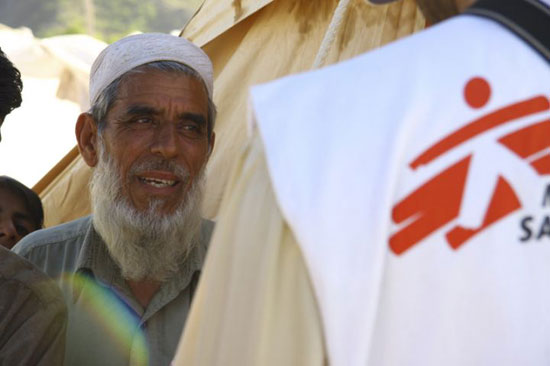 MSF staff work in a camp for displaced persons in Mardan District, providing health care, as well as water and sanitation, and distributing relief goods.

The recent violence in Pakistan’s North West Frontier Province (NWFP) has left more than 2.1 million people displaced, according to official figures. The overwhelming majority have found refuge in small improvised camps or with host families in the region, mostly in Mardan District in central NWFP. The situation remains precarious for both host and displaced families as local resources are stretched to accommodate new arrivals. Doctors Without Borders/Médecins Sans Frontières (MSF) is reinforcing local health structures to help them cope with the new and increasing needs, and is providing relief items to displaced families living outside and inside official displaced persons camps.

Most displaced people living outside of official camps

More than 80 percent of the two million internally displaced people are estimated to be living outside official camps. They have been taken in by host families or have set up improvised camps in schools, mosques, or abandoned buildings made available by communities. Some households are hosting up to 50 people in a single room. Women and children are typically sleeping inside and the men outside, or people sleep in shifts.

“Displaced people living with host families and in improvised settlements are dispersed over the whole region," said Eymeric Laurent-Gascoin, MSF field coordinator in Peshawar. "We’re targeting areas where there are high concentrations of displaced families since we don’t have the capacity to cover the needs of all the people everywhere."

The massive influx of people is straining the capacity of local health services. Hospitals in the region must cope with increasing numbers of patients suffering from medical emergencies and war wounds. Some of the hospitals visited by MSF teams are experiencing 30 to 100 percent increases in patient consultations and admissions. MSF is now reinforcing the capacity of emergency rooms, wards, and referral systems of health structures in Mardan, Lower Dir, and Malakand.

In Mardan since June 4, MSF teams have set up a 40-bed ward and are working in the emergency room of the Mardan Medical Center. During the first 10 days of activity, 94 patients were treated, of which 21 were war-wounded. Also in Mardan district, MSF is supporting the emergency room of a rural health center in Takht Bhai and is operating an ambulance system to send severe cases to hospitals supported by MSF in the region.

In Lower Dir, MSF is supporting emergency services of Timurgara District Hospital, where an average of 700 patients are treated each week in the emergency room. From May 7 to June 7, 128 people with war-related injuries were admitted, including women and children coming mostly from Swat. MSF is also supporting the emergency services of two additional health structures—Sammer Bagh and Munda—in Lower Dir, treating 350 to 400 patients each week.

“We are greatly limited by the security situation,” said Eymeric. “Ideally, we would have multiple outreach and mobile medical teams identifying needs and carrying out distributions and medical consultations, but we can’t increase the number of our teams or travel freely around the region in such a volatile security environment. We know that the displaced we reach receive good quality aid, but it feels like a drop in the ocean compared to the massive number of people who have fled the war.” 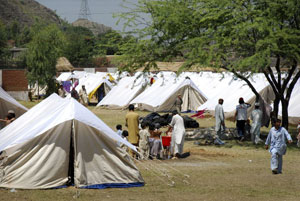 Risks of epidemics are higher with increased population density, rising temperatures in the region, and difficulties in accessing primary health care, particularly in rural areas where there are few functional health centers. Among the 2 million displaced, around 60,000 are pregnant women, according to official estimates. In order to facilitate access to primary health care, MSF is carrying out consultations, including antenatal care and mother-and-child health care, in two displaced persons camps and in 14 different sites situated in areas hosting displaced families. MSF staff carry out between 2,950 and 3,200 consultations each week in Mardan, Lower Dir, Peshawar, Charsadda, and Mansehra districts.

“Scabies, respiratory tract infections, and general body pain are the most common health problems that we see so far,” said Anja Braune, an MSF nurse responsible for primary health care activities around Peshawar. “Children under five years of age and pregnant women are particularly vulnerable. I meet patients every day that need medical treatment, but most of all there is a huge need, especially amongst women, to talk about the traumas they experienced while fleeing the violence.”

MSF is also distributing relief items, including tents, mattresses, blankets, hygiene kits, and cooking sets, to displaced families in Mardan, Peshawar, and Lower Dir. In May, over 2,000 kits of basic relief items were distributed to displaced families living in improvised camps or staying with host families. MSF is also managing three camps in Lower Dir and Mardan, covering most of the basic needs in terms of shelter, non-food item distribution, and provision of water and sanitation facilities for 11,000 people.

MSF also runs medical programs in Balochistan Province, Kurram Agency, and Mansehra District. In Pakistan, MSF does not accept funding from any government or donor agency, and relies solely on private donations from the general public to carry out its work.