The flooding in Pakistan is spreading into new parts of the country and complicating efforts to deliver aid in the affected areas. 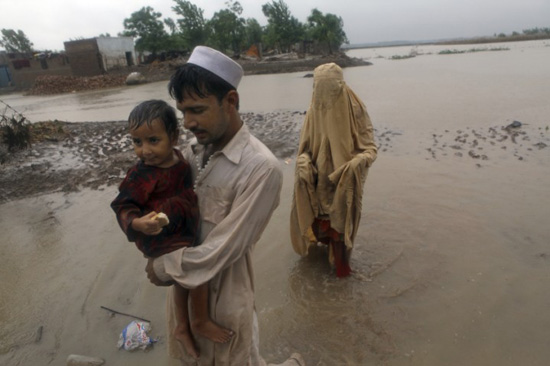 A displaced family near Gulabad.

As the flooding in Pakistan spreads into new parts of the country, the rain is still falling and the water is still rising in the areas that were initially affected, Khyber Pakhtunkhwa and Baluchistan provinces, impeding the delivery of medical and humanitarian aid. Doctors Without Borders/Médecins Sans Frontières (MSF) teams on the ground are both responding to the consequences of the initial days of flooding and also assessing the needs in the newly affected provinces of Punjab and Sindh.

Heavy rains over the weekend disrupted delivery of desperately-needed items such as soap, buckets, toothpaste and cooking utensils. In the Nowshera district of Khyber Pakhtunkhwa, the MSF team had to postpone a distribution of basic relief items to approximately 4,500 families. “The place we had identified to organize this major distribution is under one meter of water,” says Anthony Thouvenin, MSF’s emergency coordinator in Nowshera. ”Two days ago it was dry, but the water rose very quickly. Now we’ll have to explain to people that the delivery of much-needed goods will have to be delayed by at least one day. Our team is frustrated, but this is nothing compared with affected people who really need help." 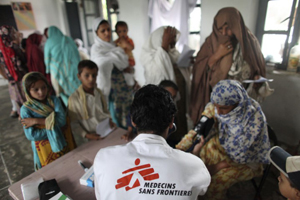 An MSF mobile clinic in Utmanzai, outside Peshawar.

Hangu district, which was initially unaffected, and where MSF ran a diarrhea treatment center and surgical activities in a local hospital, was hit by flash floods this past weekend. Houses were destroyed and a camp for displaced people was also damaged. MSF immediately donated some materials to support the local health center.

In Baluchistan, flooding on the road between the towns of Dera Murad Jamali and Khabula prevented an MSF truck from reaching a planned distribution point. The team instead used four-wheel drive vehicles to carry out a distribution of hygiene and relief items kits to 1,000 families. The distribution will continue throughout the week ahead.

Despite the impediments, MSF is continuing to provide drinking water, relief goods, and medical care to thousands of people in dire need in the districts of Nowshera, Peshawar, and Charsadda in Khyber Pakhtunkhwa, and to large groups of people around Manjoshori in Baluchistan.

Medical activities are continuing, as mobile medical teams are providing care in places—mainly schools—where the displaced have temporarily settled. On Monday, new mobile clinics are expected to start in Baluchistan and in Khyber Pakhtunkwha's Malakand, Swat, and Peshawar divisions, focusing on populations that have no access to health facilities at present. MSF continues to support health structures but the constantly changing water levels keep driving families from one place to another, making the delivery of aid challenging. At Nowshera’s Pabbi Hospital, for example, the number of consultations carried out ranges from 100 to 350 per day depending on new flood alerts. 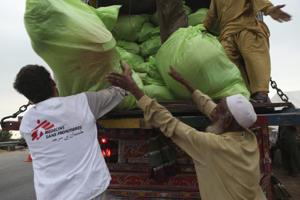 MSF staff distributing relief supplies to people camped on the side of the highway between Charsadda and Peshawar.

In the Nowshera DHQ hospital, newly-installed generators allow staff to keep the emergency room open 24 hours a day. After some rehabilitation work was completed, the outpatient department is now functional as well; more than 320 consultations were provided last Friday, though patient numbers decreased in the rainy days that followed. Three ambulances have also been provided, ensuring around 10 referrals per day so far.

In all health facilities run by MSF, the most common pathologies are those linked to the living conditions. The situation is similar in MSF medical programs that existed before the floods—in Dargai, Malakand, and Swat—where teams have started new mobile clinics.

“One out of three patients that we see here has a skin infection,” said Dr Majid, a Pakistani doctor working in a mobile clinic north of Charsadda. “The fact that people live very closely together in wet and unhygienic conditions is a major factor. Other diseases like diarrhea are also very common."

One way to prevent the spread of disease is to insure access to clean water. MSF water and sanitation teams are working hard to provide water to communities, supporting the local authorities’ attempts to rehabilitate water delivery systems while trucking water to families who need it in places such as Charsadda, Nowshera, Swat, and elsewhere.

“Our priority is to provide drinking water to as many people as possible,” said Thomas Batarday, who manages the water delivery program in Charsadda. ”We are delivering more than 85,000 liters every day, and that’s on top of the 21 water points we set up in the city. We’ll keep that set up until the water delivery system is functioning again."

Water points have also been set up in Lower Dir and in eight localities in Swat that are home to approximately 100,000 people. In addition, MSF provides clean water to the district hospital in Lower Dir and is working on restoring drinking water supplies in Nowshera.

More assessments will take place in the coming days, as it is believed many pockets of people remain isolated and have not received any aid as of yet. MSF completed some assessments by helicopter last week, but the weather over the weekend prevented further air-borne assessments.

The situation in the provinces of Punjab and Sindh is a major cause of concern. The authorities have been organizing the evacuation of hundreds of thousands people as heavy rains have blanketed certain areas over the last few days. An assessment team of five MSF workers, including two doctors, left today for Punjab's Muzaffargarh district. Another will evaluate needs tomorrow in Kashmor in Sindh.

A cargo plane carrying 60 tons of water and sanitation equipment, drugs, and logistical material has arrived in Pakistan. Another, carrying 50 additional tons of relief supplies, will follow shortly. More than 100 international staff are currently working alongside 1,200 Pakistani in MSF programs in Pakistan.